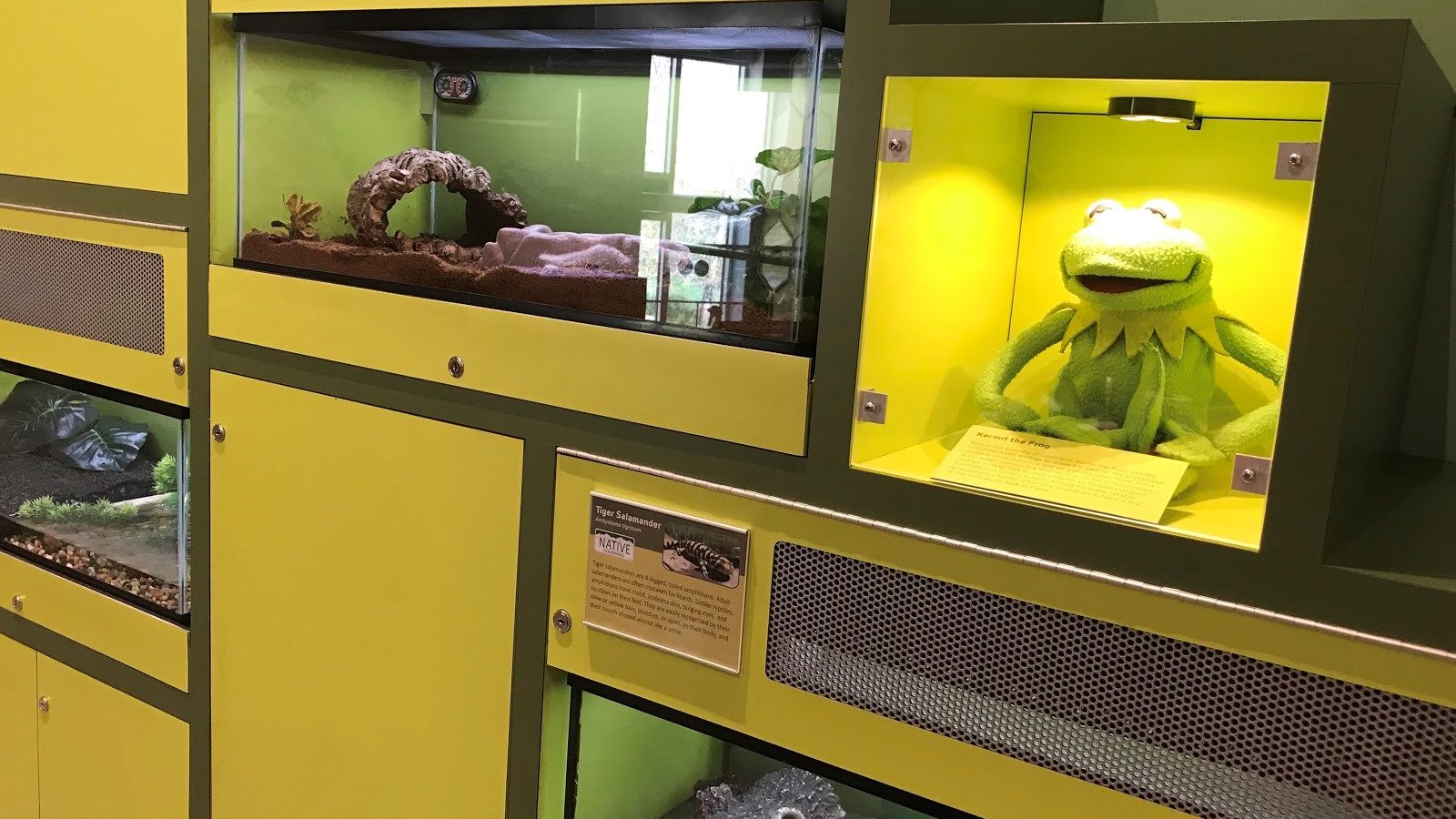 Did you know that amphibians were the first animals to live on land? Or that they swallow by blinking and pushing the backs of their eyes into their throat?

Today, we’re looking at the amazing world of amphibians!

What is an amphibian?

Toads, frogs, and salamanders are all amphibians. While amphibians are a wide and varied class of animals, they all have a few things in common.

Amphibians have slimy skin which they can breathe and drink through and has to be kept damp at all times. Amphibians lay squishy, shell-less eggs in water. And they all start out life as aquatic larvae, later metamorphosing (like a caterpillar turning into a butterfly) into their adult form, growing legs and shedding their tails!

Because water is so important to amphibians, they are often found around ponds, streams and marshes. But spending so much time in water means they can often be the first animals affected by a change in water quality. Amphibians can be the first warning that something is wrong with an environment, as they are very sensitive to pollutants, and a decline in amphibian populations can be a clue to scientists that something is wrong. But when amphibians are doing well, that means the environment around them is, too – which is why they are such important animals to learn about and protect!

At the museum, we have four species of amphibians on display, two of which are native to the US, and one that can be found right here in Colorado! 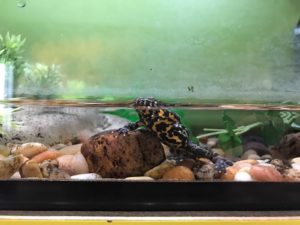 Despite being called toads, these Eurasian amphibians are technically frogs – you can tell by their long legs and preference for swimming.

These amphibians display two interesting types of coloration at once: camouflage, which blends them into their environment, and aposematism, which warns predators that they might be dangerous. Much like poison dart frogs, fire-bellied toads are brightly colored to warn predators that they are toxic. However, while poison dart frogs are bright all over, fire-bellied toads limit their bright warning coloration to their bellies. When a predator looks down on a frog, it sees only the green and black camouflage on its back, and might not notice it. But if the frog is threatened, it can rear up on its back and show off it’s bright belly that acts just like caution tape and says: stay away from me!

This behavior, called an unken reflex, actually gets its name from fire-bellied toads and the German name for their species, Unke. 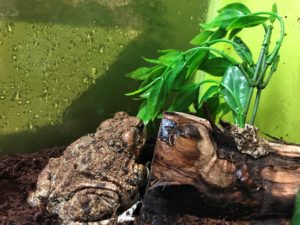 Our southern toad is actually more of a southeastern toad, hailing from the warmer and wetter parts of the American east coast, from North Carolina to Mississippi. These amphibians are true toads – warty, with short legs ill-equipped for swimming and jumping but built perfectly to dig. They actually have claw-like spurs on their back legs that help them build burrows to stay safe and moist when the weather gets too hot, too cold, or too dry for them.

Like all amphibians, they lay their eggs in open water – about 3,000 of them per season! After only a couple of days, these eggs hatch into tadpoles, which undergo metamorphosis when they’re barely half an inch long! 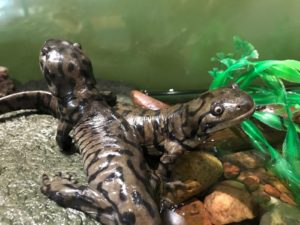 These salamanders are a Colorado native and can be found in marshes and ponds right here in Fort Collins! But they’re not picky about where they live – they’re actually the most wide-spread salamander species in North America, ranging from Canada all the way to Mexico! Their name comes from the yellow and black splotches on their skin, which look a little bit like tiger stripes. Like tigers, they are also ferocious predators – even if they don’t look like it. When they emerge from their burrows to hunt, they look for anything they can eat – worms, spiders, and beetles, even frogs and smaller salamanders are all fair game!

Our salamanders at the museum get so excited during feeding time, that sometimes they’ll even try and bite their caretaker’s fingers! Unlike frogs, salamanders actually have teeth – lucky for the people feeding them, they aren’t very sharp. 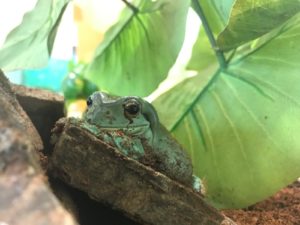 These Australian frogs are very popular in the pet trade because of how calm they are around humans – even wild frogs will find their way into people’s sinks, laundry roo

rooms, and bathtubs, no matter if they’re occupied!

Unlike some frogs, White’s tree frogs do not have long sticky tongues that they use to catch prey. Their preferred method of hunting is close-range. Once they’re close enough to a bug or other tasty morsel, they lunge at it with their mouth open wide and scoop it up into their gob with their hands.

These frogs are also very unique for the way they protect their delicate amphibian skin. They secrete a goo from their skin that is antibacterial, antiviral, and antifungal, allowing them to stay safe and free from disease even when they’re living in places that are mucky and full of germs. The virus-fighting ability they possess is so impressive, it’s even being studied for use in human medicine!

Amphibians are amazing animals, coming in so many different shapes and sizes. From legless, soil-dwelling caecilians to flying tree frogs, they all play an important part in our ecosystem!