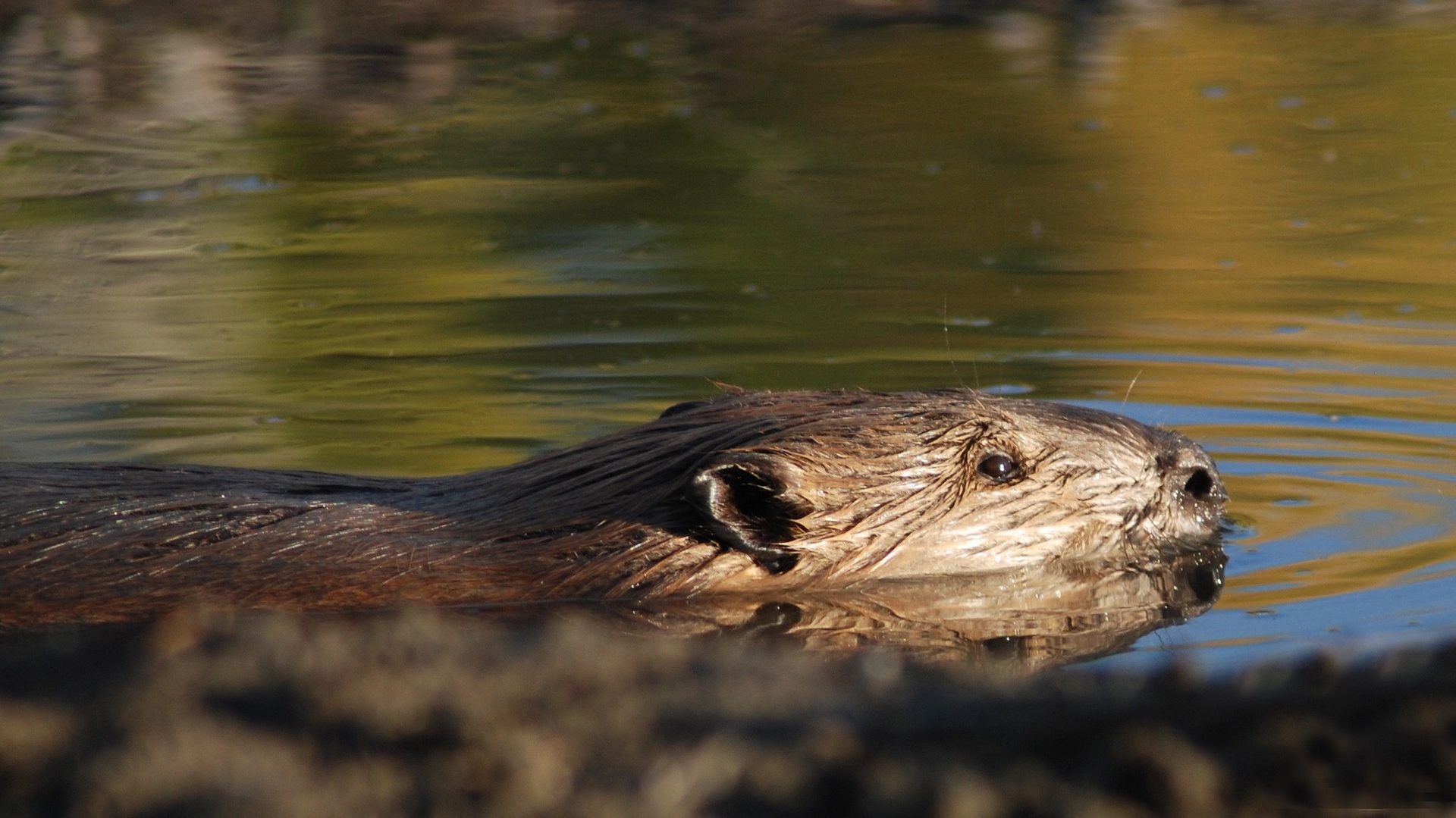 (A personal disclaimer: I grew up in Oregon–the Beaver State; in Corvallis, which is the home of Oregon State University and, of course, the mighty OSU Beavers. Our family drove around with twin stickers on our back-bumper declaiming “I’m a Beaver Believer” and “I’ve Got Beaver Fever.” I come by my love for these buck-toothed engineers honestly, and my “beaver fever” is unabashed.)

My experience with historical research has taught me that it can be almost impossible to pick up and follow a single topic: inevitably one thing is knotted on to another, tangled up with a dozen more, and sometimes tied on to its own tail. This has been the way it’s gone with my research on the beaver felt top hat of my last post. My research on that object made me curious to see what other artifacts of beaver history are preserved in the Fort Collins Museum of Discovery’s collections. Turns out it is an impressive inventory:

1 sweet beaver fur cape and muff set, made from beavers trapped on George Campton’s ranch in Livermore about 1910 for his sister

1 old beaver trap, pulled out of the Cache La Poudre River and donated to the Museum in the 1960s

a set of beaver skulls

The presence of these beaver-related objects in the Museum’s collections reflects a steady involvement of the species in our region’s history, despite an economically driven “beaver fever” that severely depleted their numbers before Colorado had even become a state. The earliest historical trapping records of the Colorado Rocky Mountain region show sixty to eighty beaver present per mile of stream. By the turn of the 20th century the species’ population nationwide was as low as 100,000 individuals, very few of whom were here in the West.

Two sources I’ve come across recently not only decry the West’s loss of beaver populations, but advocate their protection and reintroduction as a means of conserving our region’s natural and cultural riches. Both recognize that in shaping the region’s waterways to their own purposes, beavers once played, and can play again, a vital role in maintaining the environments in which the region’s unique human history has unfolded. The first of these is Beaver World, a charming book by Enos Mills, a signed copy of which is in the Fort Collins Museum of Discovery’s Local History Archive. Mills was a passionate advocate for the natural world, and an astute direct observer of wild animals interacting with the environment. Beaver World was published in 1913, and in it Mills not only gushes about the beaver’s emblematic industriousness, “He works not only tooth and nail, but tooth and tail,” but more insightfully recognizes the role the species plays in maintaining both a healthy ecosystem, and a landscape humans find welcoming and pleasing:

Beaver works are of economical and educational value besides adding a charm to the wilds. The beaver is a persistent practicer of conservation and should not perish from the hills and mountains of our land. Altogether, the beaver has so many interesting ways, is so useful, skillful, practical, and picturesque that his life and his deeds deserve a larger place in literature and in our hearts.

The beaver’s role in maintaining healthy, functional Western ecosystems is the central focus in the much more contemporary article “Voyage of the Dammed,” carried in The High Country News. Writing at a time when water conservation is a high-profile problem and many of its proposed solutions carry high price tags, author Kevin Taylor outlines the position of environmentalists and other concerned citizens who advocate, at least in part, leaving it to the beavers:

The humble, hardworking rodent, through its dams and ponds, can extend the release of water late into summer, saturating the ground and healing watersheds. It has the power to re-create the primordial, wetter West that existed for millennia.

The article extends the beaver’s vital restorative role to cultural values as well. Taylor quotes a Coeur d’Alene tribal elder, 86-year-old Felix Aripa, who sees within the native ecosystems restored by beaver activity the roots of cultural restoration: in the returning native plants, fish, and animal species are embodied the cultural riches of language and long-held cultural knowledge.

These two sources have whetted my appetite for learning more about this species, and for doing what I can to promote its ongoing presence in our region. I understand that in caring for the beaver artifacts which lie within the Fort Collins Museum of Discovery’s collection — clothing, tools, and scientific specimens — we preserve the history of a species which plays a central role in the Native American traditions of this area, as well as in the story of the region’s surge in population and development in the 19th century. As I read the strong praise Enos Mills gives this species and the excited plans of those advocating its restoration, I’m thrilled with the possibility that within today’s beaver population is preserved a solution to our region’s compelling need to conserve both the health of the environment and the wealth of our cultural and historical heritage. “I’m a Beaver Believer” indeed.

Camp Merritt (in New Jersey) was the final stateside station for Colorado’s WWI Battery A soldiers. On January 23, 1918, they boarded the steamship Baltic, bound for Europe.  After a stop in Halifax, Nova Scotia, they set forth on January 27, escorted by a British cruiser (and later in the journey, eight destroyers). These precautions were necessary to ward off U-boat attacks.

On February 5, 1918, the artillerymen witnessed the sinking of the troopship Tuscania by UB77 off the Irish coast. The Doughboy Center website (http://www.worldwar1.com/dbc/tuscania.htm) tells us that “The Tuscania was the first ship carrying American troops to be sunk, and public opinion in the USA regarded its loss as an outrage.”

Hurdle’s scrapbook page shows a typical transport convoy; the Prince George; and a shot of the Tuscania taken from the Baltic. 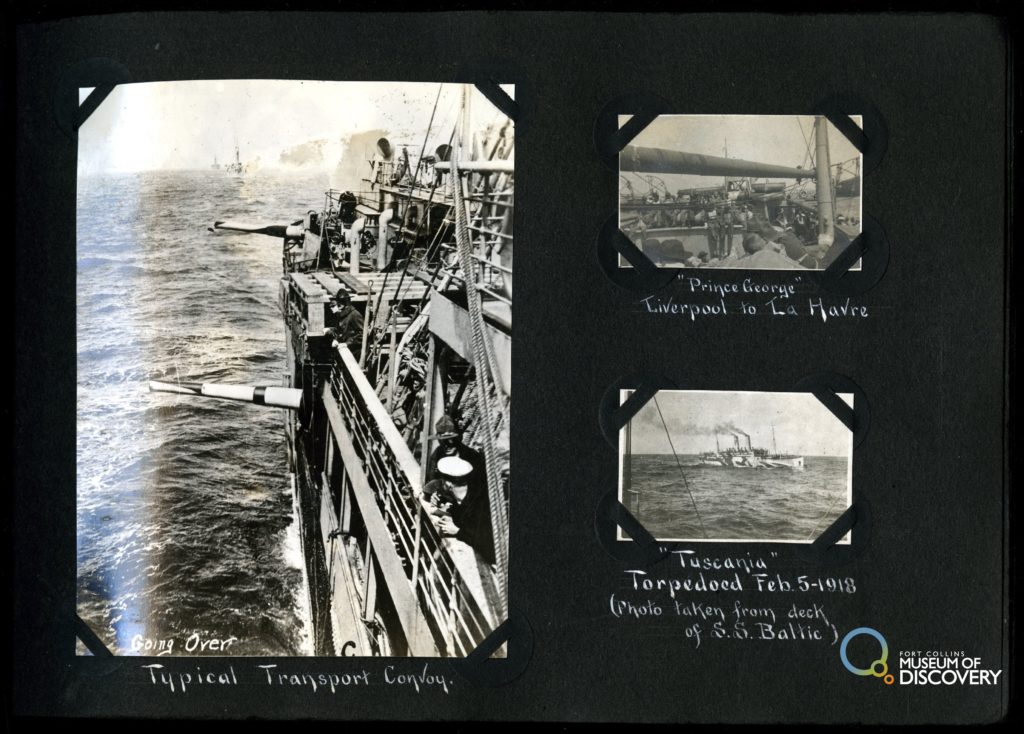 The soldiers disembarked at Liverpool, traveled by train across England, then across the English Channel. Heavy seas were running, and “packed like sardines,” the men uniformly became seasick before finally setting foot in France. In a letter home, John Hurdle discussed the seasickness – and a dubious remedy for it – on the trip across the Atlantic:

“We went on the boat in the afternoon, and before midnight had several cases of seasickness while the boat was still tied tip to the pier. … One of the boys in B Battery had a sure method of preventing seasickness [eating onions]. … But let me give you a tip—if you ever take a sea voyage, don’t eat onions, and don’t let any of your associates eat them, because they don’t help any…”

Two days of discomfort riding in boxcars on French railroads brought the regiment to Camp de Souge, where it spent the next two months in additional training. The highlight came when the regiment received its artillery piece, the 155 mm Grande Puissance Filloux (GPF).  John Hurdle’s gun crew called their GPF “Gila Monster,” and Hurdle would later give a very extensive description of its use in the war. Here’s a picture of it, labelled “My gun, ready to move, in position.” 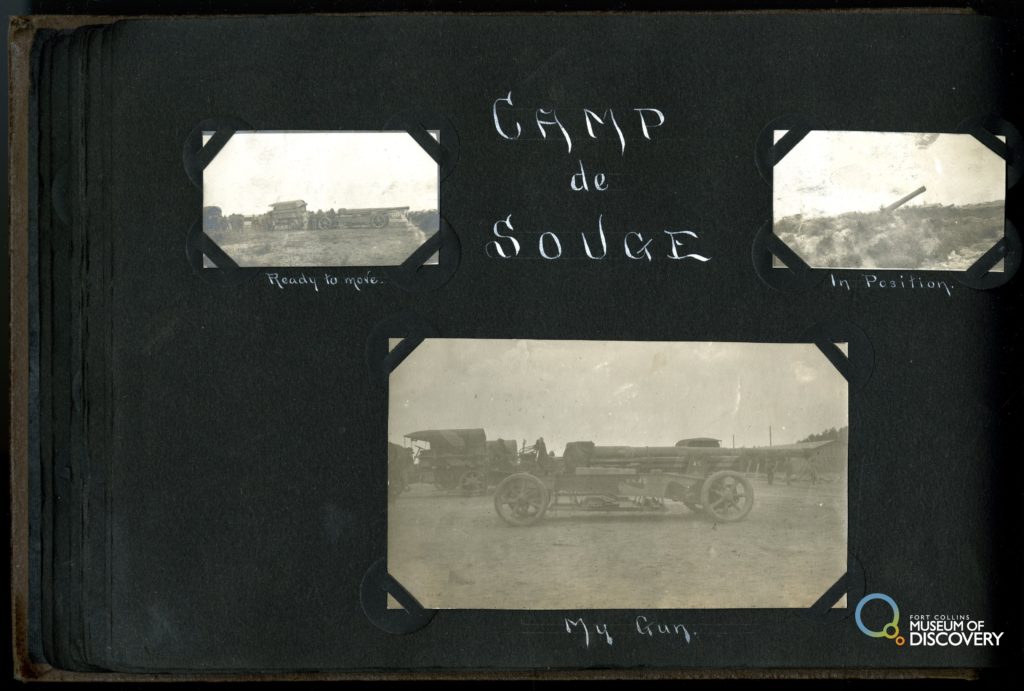