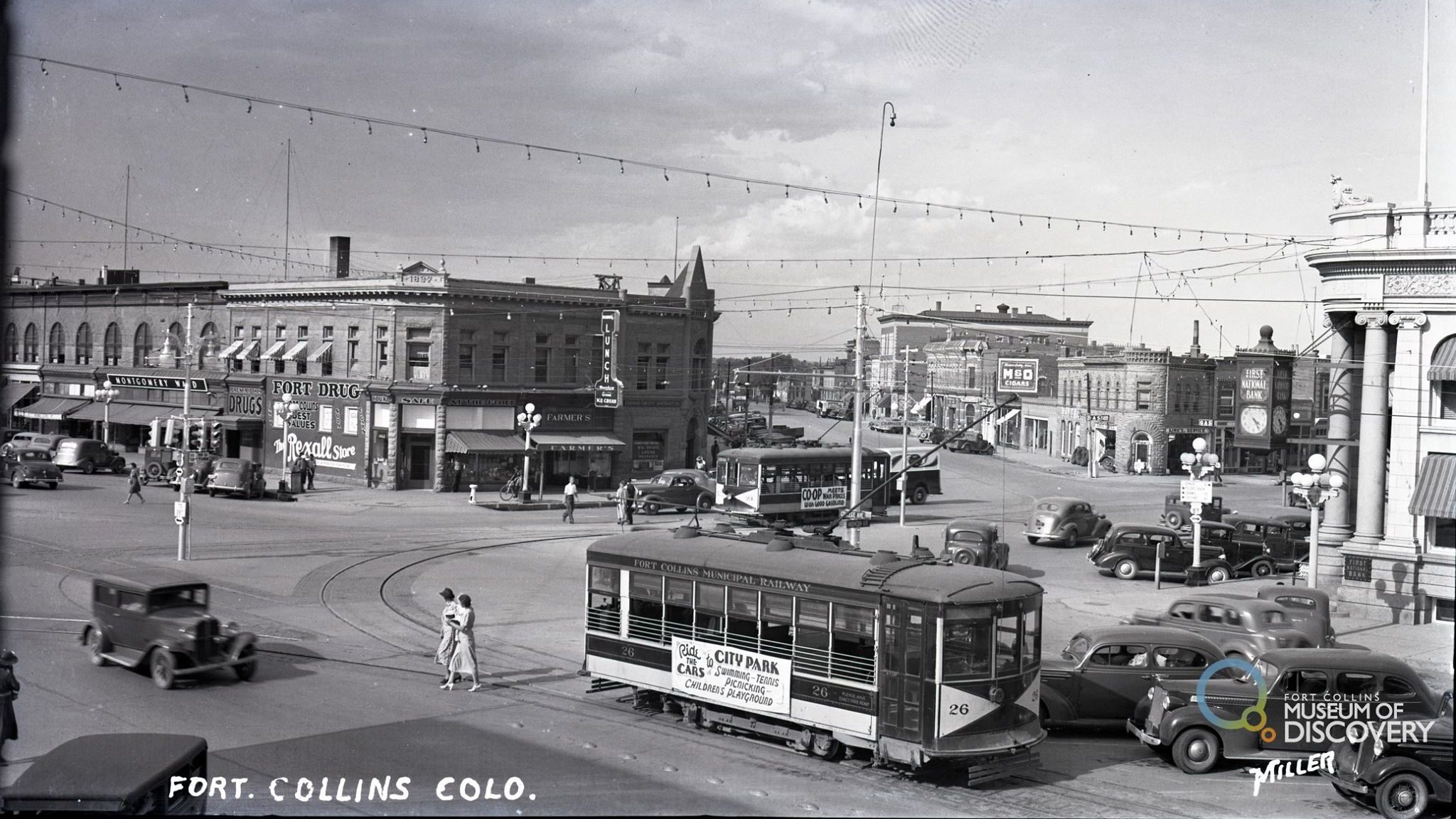 The 1910s were turbulent for Fort Collins, as for the rest of the world. The first world war dominated the news of the latter half of the decade. However, there were also many important civic developments. Among these was the city’s change to a commission form of government in 1913.

Also important to the town’s continued development was the sugar industry, which continued as the dominant economic force of the area. In September 1919, The Fort Collins Express noted that an estimated twenty million dollars had been paid for sugar beets in Larimer County in over a period of seventeen years.

College students built and whitewashed the “Aggie A” on a hillside west of town in 1912. Three years later the school and the town celebrated the football team’s first conference championship. The Fort Collins Express expected the title to bring more students and prestige to the school and consequently benefit the town. Annually, the “Aggie A” is still painted by college students.

Despite a generally depressed farm economy after World War I, Larimer County farmers were comparatively prosperous. The Fort Collins Express-Courier (the two local papers combined in 1920) claimed that no other county in Colorado fed as many sheep and cattle as did Larimer County.

Larimer County was also prospering industrially. It ranked third among Colorado counties in manufacturing. Most of the factories were in or near Fort Collins. The biggest producers were the sugar factory and the Ideal Cement plant built in 1927 near La Porte.

“History is the whole series of past events.”

History contains the good, bad, and ugly – and the 1920s witnessed a resurgence of the Ku Klux Klan in Colorado. The Klan gained control of state politics during the early part of the decade and had many men in elective and appointive offices. Klansmen in Fort Collins could be found in courthouse offices and city hall. During one rally, sheet-covered KKK members marched from North College Avenue to Lincoln Park. However, the Klan did not place a significant number of its people into local public offices. Its influence faded during the latter half of the decade.

A political figure on the rise, Franklin D. Roosevelt, visited Fort Collins in 1920 on a campaign tour as a vice-presidential candidate, and spoke from the courthouse steps against increasing the Navy and for the League of Nations.

The Great Depression of the 1930s worsened an already dismal situation. A farm economy which had been depressed since the end of World War I sank even lower as prices fell to new lows for agricultural commodities. Drought during the first half of the decade, combined with a grasshopper plague, added to the hardships, especially for plains farmers, many of whose crops were lost.

In the Fort Collins area, the water shortage became so severe that the city banned the use of water from the waterworks system for lawns and gardens in September 1934. The Cache la Poudre River was said to be at the lowest level known since settlement of the valley. In March 1935, the city council approved a watering rule which allowed townspeople to water their lawns one day per week.

The Extension Service of Colorado Agricultural College played a vital role in providing relief to afflicted farmers. Extension personnel helped to gather and distribute food, protect crops from grasshoppers, and promoted tree cultivation. The Extension Service also participated in the development of several New Deal programs. The College’s Experiment Station also worked to alleviate the effects of the drought and grasshoppers and conducted other beneficial projects.

The war in Europe, which began in 1939, had almost immediate effects in Fort Collins.In October 1940, 3,881 Larimer County men registered for Selective Service. A national draft was held at the end of the month. Battery A, of the 168th Field Artillery and Medical Detachment, was inducted into the U. S. Army in February 1941.

Because of Colorado State College’s tradition of supplying military instruction, an R. O. T. C. program, and pilot training, its former students contributed heavily to the war effort. More than eighty former C. S. C. students died in the war. The College’s faculty also took part. Over one-third of the male teaching and research staff served in the armed forces or as advisers to the military. Several members of the faculty aided in weapons research, including work on the atom bomb. The College’s Extension Service and Experiment Station worked to maximize food production. 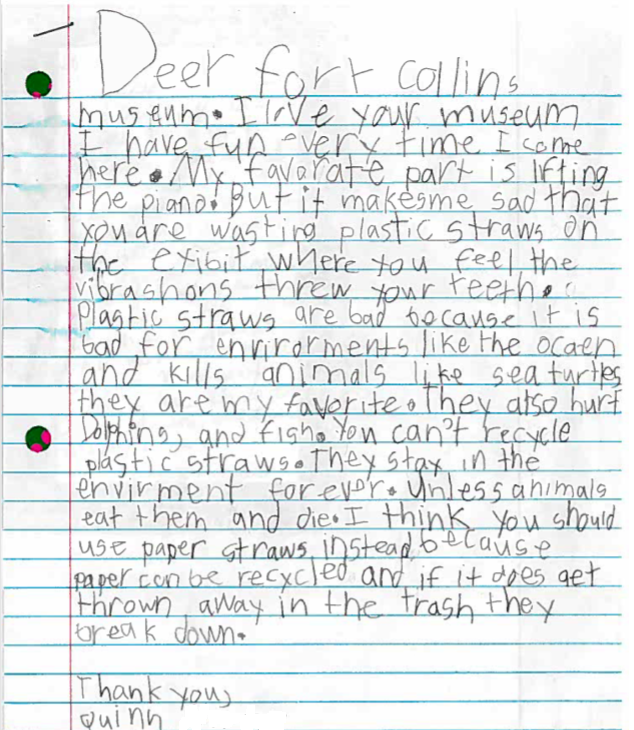 “Deer Fort Collins Museum,
I love your museum I have fun every time I come here. My favorate part is lifting the piano. But it makes me sad that you are wasting plastic straws on the exibit where you feel the vibrashons threw your teeth.” – Quinn, age 7

That’s the last (plastic) straw! As an article in The Coloradoan illustrated, Fort Collins’ restaurants are joining a national movement to replace plastic straws with paper straws. Others are no longer carrying straws or offering them unless requested. And some restaurants are getting rid of single-use plastic all together! The Museum Café recently swapped out plastic straws in favor of biodegradable ones, expanding their list of compostable items to include plates, cups, and silverware as paper products.

Plastic straws do not decompose in landfills, and they are likely to end up in the rivers and contribute to the environmental problem on beaches and in the oceans. In an effort to address this issue, many Fort Collins restaurants and companies are ditching the plastic straw.

Our exhibits manager, Ben Griswold, had the honor of responding to Quinn’s letter. We wanted to show Quinn that using your voice is important and that we value him taking the time to share his thoughts with us. Quinn has – and will continue to – make a difference in the world. 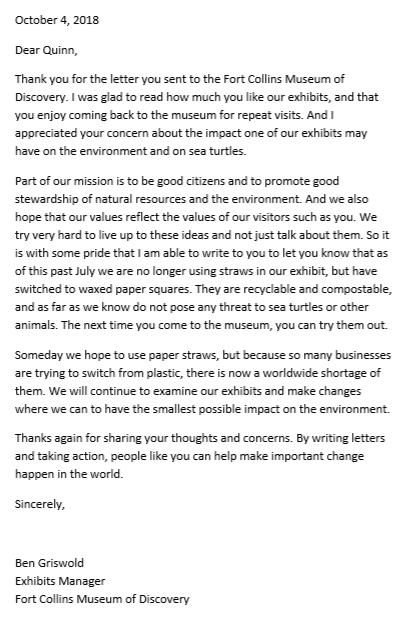 Closer to home, the museum’s exhibit “Sound Bites” is now working with wax paper instead of plastic straws to make “green” exhibits the norm. 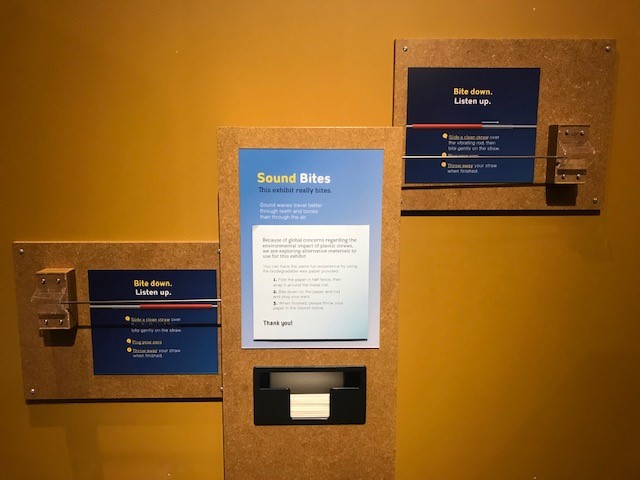 So where do the compostable straws end up? Biodegradable waste generates several tons of compost that can be used as a soil amendment in gardens and elsewhere. 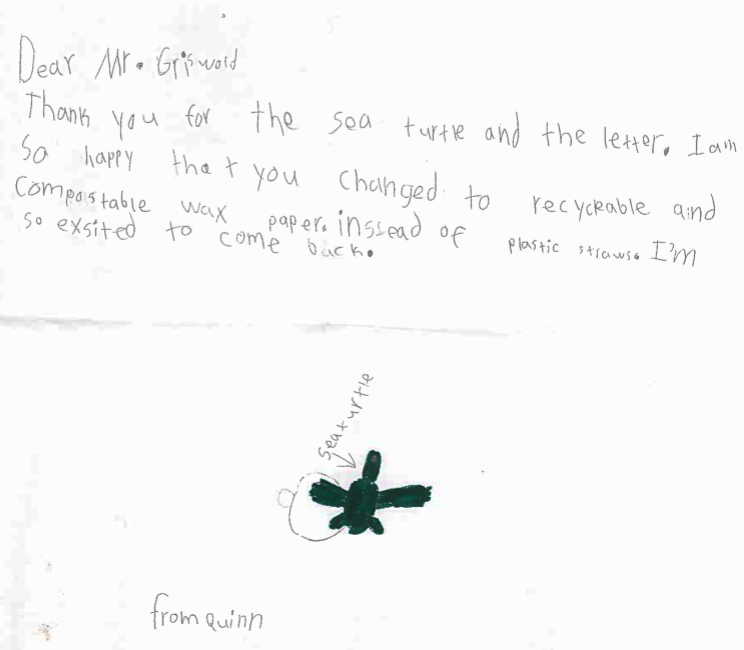 Will you join Quinn and the museum as we strive to be sustainable?

Sustainability is a core value at Fort Collins Museum of Discovery. The vision of the museum is to inspire inquisitive thinkers and encourage responsible stewardship of the future. Throughout the museum, we talk about stewardship – of self, community, and environment; how our small actions impact the world around us in ways both large and small.

Below are some steps that you can take to recycle in your home to be sustainable. #AmericaRecyclesDay #BeRecycled 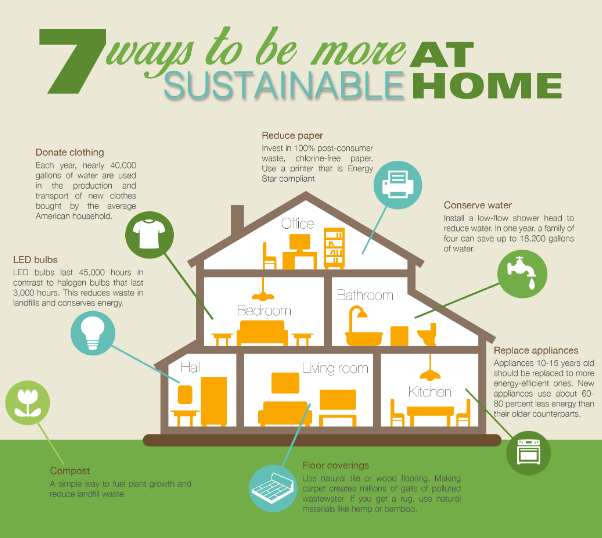 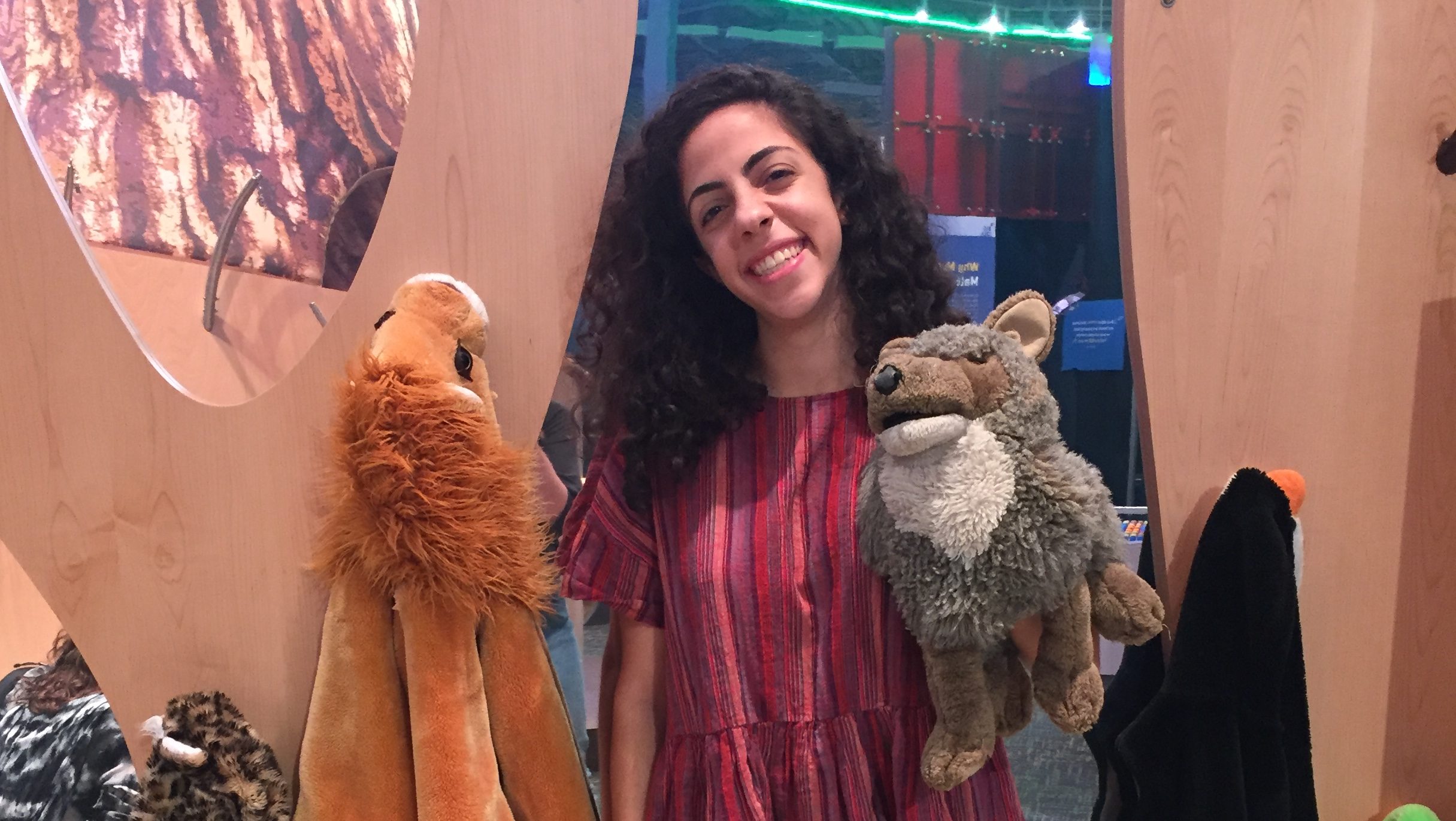 When you started volunteering here: I started at FCMoD in November 2017.

Hobbies/Interests: I enjoy playing my violin, going on hikes, listening to podcasts, and playing with my cat and dog.

Current/previous occupation: I am currently working as a Medical Scribe and Assistant at a Neurology Clinic. I graduated with a B.A. in Music and was a Pre-Med, so I am currently applying to medical schools. I am interested in either pediatrics or academia to become a medical school professor. I am keeping my options open!

Favorite book: My favorite book is The Kite Runner by Khaled Hosseini.

Favorite vacation memory: My favorite vacation memory was at my grandma’s house in Akka, Israel when my cousin and I found a dove with a broken wing. We were able to foster it and get it the help it needed, so that was neat! My grandmother taught me the word for “bird” in Arabic and I never forgot it!

One thing you want people to know about you: I love meeting new people and learning about what makes everyone unique so if there is anything you would like to know about me, come and introduce yourself!

Favorite thing about volunteering at FCMoD: I like being able to interact with different age groups here at the museum. I also love seeing what kids can teach me and discovering what they are passionate and excited about. The museum creates an excellent space for learning and exploring.

Thank you for all you do for FCMoD, Rawan! 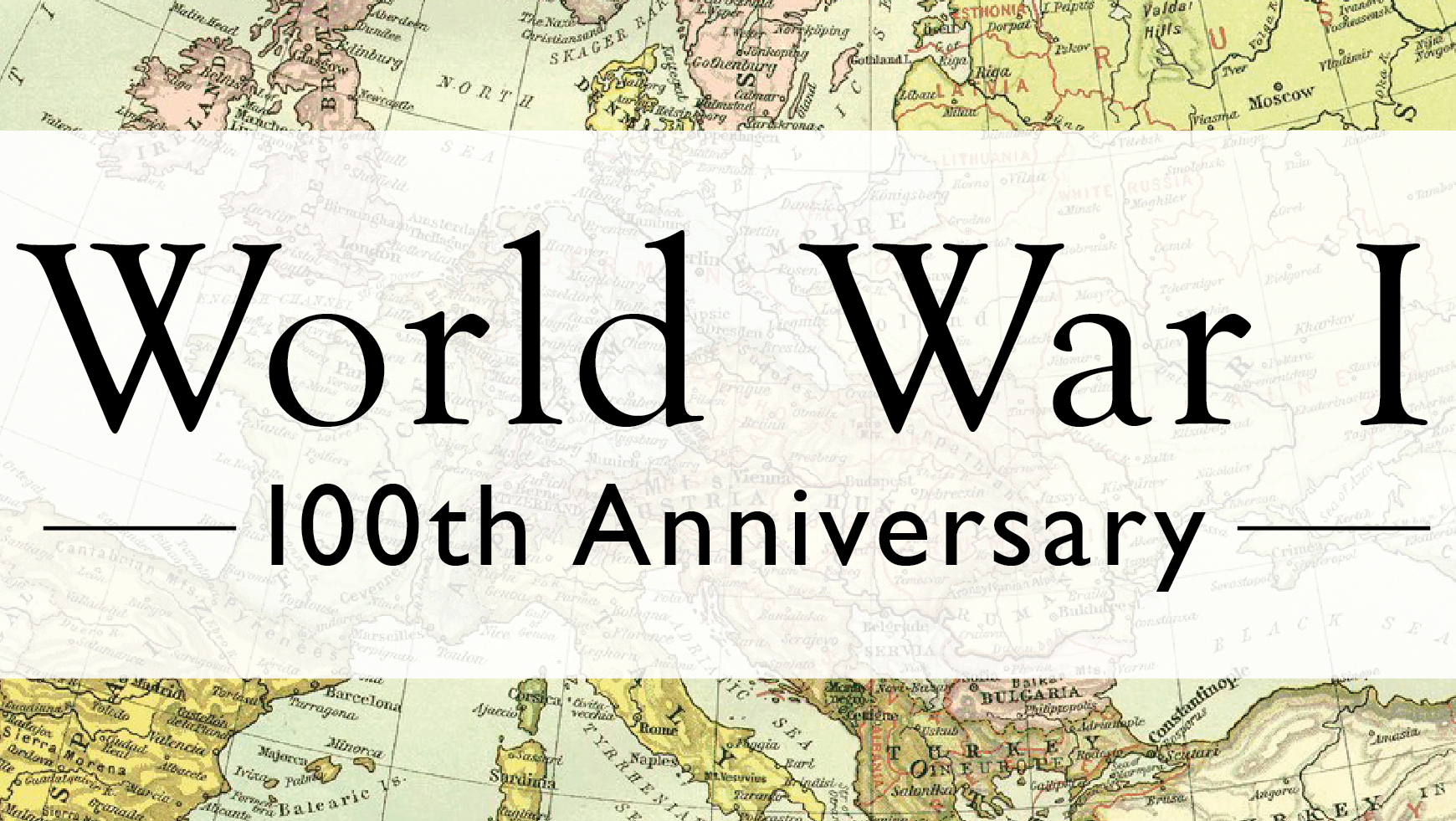 Join us on Thursday, November 8th, for World War I and Fort Collins: Exploring the John Hurdle Scrapbook in the OtterBox Digital Dome Theater to commemorate the “War to End All Wars” through the local lens of a remarkable scrapbook created by John Hurdle, a Fort Collins man who traveled to Europe and served on the Western Front with Artillery Battery A during The Great War.

On November 11, 1918, an armistice with Germany was signed in a railroad carriage at Compiègne. The ceasefire went into effect at 11am, and for the soldiers of Battery A, the war was effectively over.

“There was none of the cheering or the excitement, crying, weeping, hugging and slapping of shoulders that you would want to see. It is hard to express our feelings. We were tired.” Fort Collins Weekly Courier, December 27, 1918 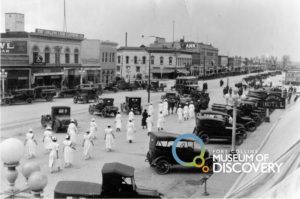 The fighting may have been over, but it would be many more months before the soldiers of Battery A returned home to Fort Collins.

Soldiers of the 66th Field Artillery Brigade (which included Battery A) were part of the occupation force in Germany. They spent a few weeks in Blercourt; on Thanksgiving were served a huge traditional dinner; on December 2 departed for Germany; and celebrated Christmas Day in Germany by opening six kegs of beer. They remained in the town of Hohr-Grenzhausen, near Koblenz, until late May 1919. 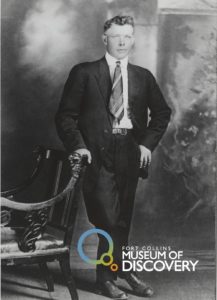 Stories in Fort Collins newspapers in 1918 and 1919 reported the deaths of three men of Battery A. Charles Conrey was killed in action on October 10, 1918. Jesse Martin and Frank Niemeyer died of pneumonia while the unit was still in Europe. In addition to these three, John Hurdle’s album lists four other casualties: Louis H. Pinkham, Charles C. Moore, James Orendorf, and Walter G. Ridgeway.

“LeRoy Hafen’s Colorado and its People, Volume 1 (1949), page 540, reports that ‘1,009 [Colorado military personnel] were killed or died in service.’ … Many died of disease, including Walter Ridgeway of Battery A, felled by tuberculosis. … Ironically the number of war dead paled in comparison with the more than 7,783 Coloradans who died during the influenza pandemic which dealt death around the world mainly between September 1918 and early 1919.” (Colorado World War I Centennial Commission)

Battery A soldiers left Germany for France on May 26, 1919; departed France on June 3; and arrived in New York City on June 15. At Camp Mills, on June 19, their regiment was disbanded.  Batteries A, B, C, D, and E arrived at Colorado Springs on June 24 via train, and “the Regiment marched in parade amid the shouts and praises of the entire populace.” From there the soldiers went on to Denver, Fort Collins, and Cheyenne, where they received similar welcomes “and the appreciation from the citizens of our record on the fields of France.” By the end of June the batteries had been discharged from military service.

To learn more about what happened to our Fort Collins soldiers AFTER World War, check out the resources below. And visit the Archive!