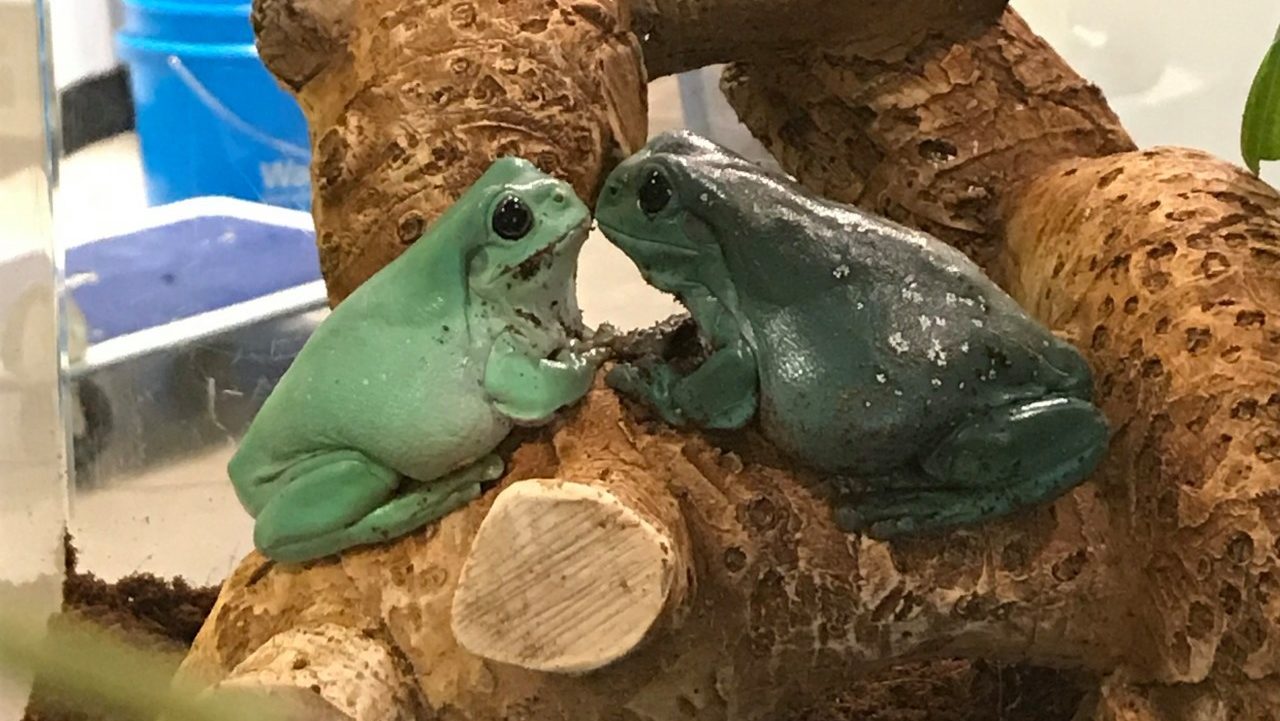 Love is in the air, and humans aren’t the only romantics in the world. Today we’re looking at the courtship rituals of the animal kingdom!

Do you know what your love language is? Is it words of affirmation like a sweet letter, quality time like a romantic night in, receiving gifts of flowers and jewelry, acts of service, or physical touch like a hug or a cuddle? Humans have different ways of showing affection, and so do animals. But instead of things like poetry, romantic getaways, and chocolates, animals have their own unique love languages. Which animal love language do you relate the most with?

The Singer
Much like the romantic poet, some animals like to shout their love from the rooftops. Frogs, birds, crickets, and even whales use their songs to attract mates, constantly trying to out-do their competition with the loudest and most attractive voice. Frogs even have regional dialects – members of the same species may have different croaks if they have originated from different places where their local songs are slightly different. And in places where there are several different species of frogs all singing at once – like in Florida, where the invasive Cuban tree frog has been introduced into the territory of native American green tree frogs – the frogs will purposefully alter their croaks to differentiate between species and avoid confusion.

The Dancer
But maybe you’re more of a visual person. There are plenty of animals whose main courtship rituals involve elaborate dances and displays of beautiful fur and feathers. But some animals forget the flashy outfits and just focus on their moves. Hirtodrosophila mycetophaga is a species of australian fly which performs mating displays on shelf mushrooms. The males wave their wings around and perform a dance – but only on lighter-colored fungi, as these mushrooms act as a better backdrop for their performances. On darker fungi, they blend in too well, and females pass them by!

The Show-off
Not to be outdone, some animals go all in, with song, dance and color! Take the peacock spider: while you may be familiar with this small jumping spider’s namesake and its colorful plumage, this arachnid goes a step further and incorporates sound and movement into its mating display.

While displaying their brightly-colored abdomen, they wave their legs in an elaborate dance and create deep rumbling vibrations while they perform. The males who put the most effort into their displays, including both the dancing and vibrating, are more likely to get the girl.

The Collector
Some animals speak the love language of gift-giving. Native to New Guinea and Australia, bowerbirds build elaborate ‘bowers’ from nature to attract mates. First, the male Bowerbird gathers sticks and arranges them into an upright structure, often in the shape of an arch or an avenue. Then, he populates his bower with brightly-colored objects. These can be shells, flowers, even pieces of plastic and metal that he finds. Some bowerbirds even have favorite colors, and will collect only pieces that fit into their preferred color scheme! When she’s ready to find a mate, the female bowerbird tours the bowers of all the local males, and chooses the bird with the best crib to be her mate.

The True Romantic
But maybe you’re a real classical romantic. You want long walks on the beach, hand-holding, and slow-dancing. Don’t worry. Not everything is about flashy displays. Some animals like to take it slow, and build up deep bonds with their mates. Seahorses have an elaborate courtship process, with each step of the ritual being repeated again and again, often over the course of days. First, they meet and change colors, brightening in turns at each other. Then they grab hold of the same anchor-point and spin around each other in an elaborate dance with many distinct moves and steps, including leaning away, pointing, quivering and spinning. Finally, they end their dance by floating up through the water column together. While they might only be fish, seahorses are quite the romantics – they mate for life, and their specialized tails, used to anchor themselves to coral and seaweed, also allow them to “hold hands” with their significant other.

Happy Valentine’s Day from all of us at FCMoD!