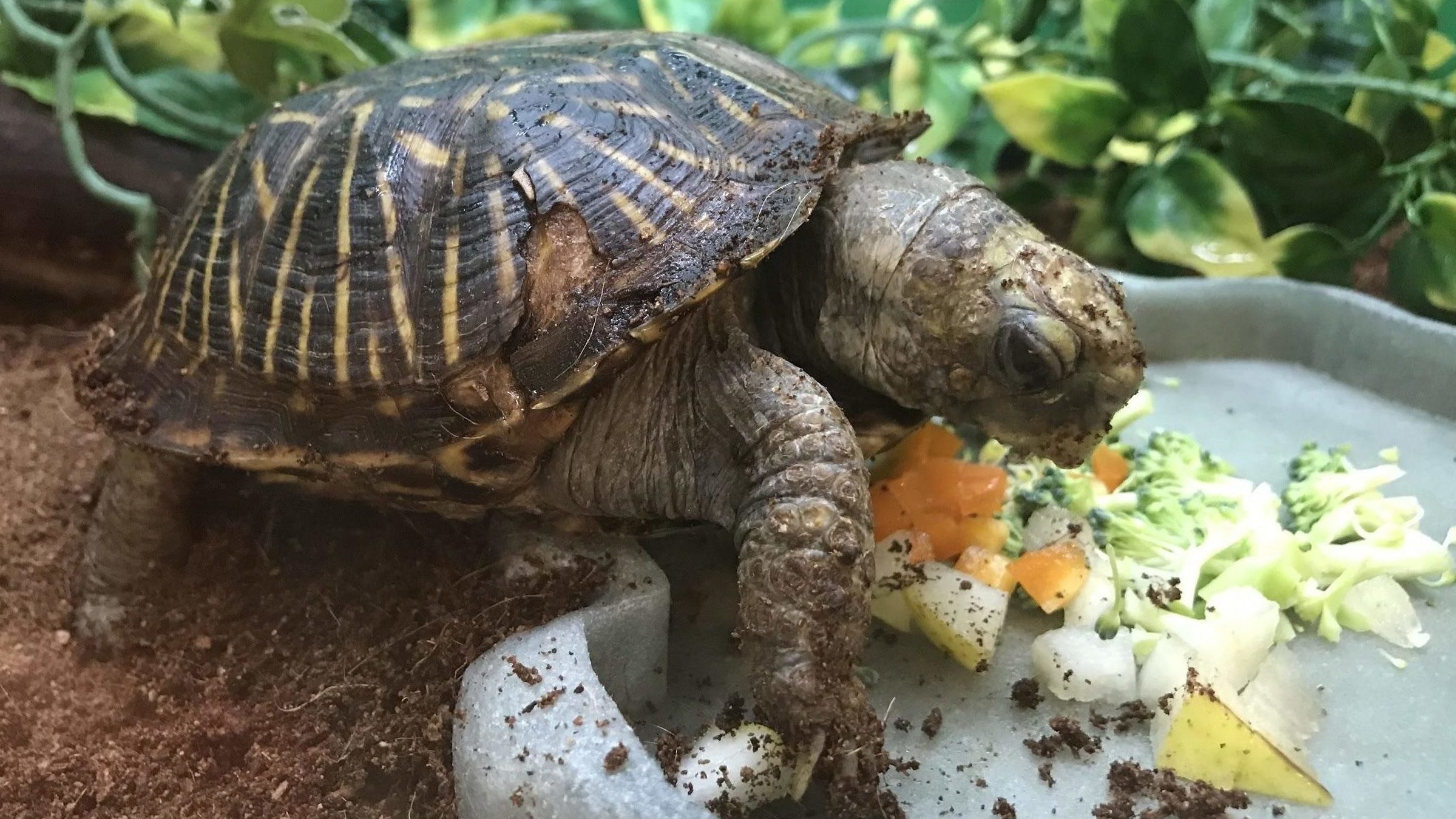 Have you met our Ornate Box Turtle, Tara?

Ornate Box Turtles are a species of box turtle native to the great plains of the midwest – including Colorado! Our Tara was a wild turtle who was taken in by the museum after she was hit by a car and her shell was cracked – look closely and you can see the places where the scutes (the separate bits of hard keratin covering a turtle’s shell) are scarred from her injury.

But how do cold-blooded animals – who can’t warm themselves up on their own like we can – survive the harsh Colorado winters we get if they don’t have a museum to live in?

When it gets cold, reptiles will go through a process much like hibernation, called brumation. Unlike hibernating animals, who are asleep for the whole winter season, brumation only occurs in cool temperatures, and if it warms up enough, even in the middle of winter, brumating animals will wake up, go about their business, and go back to brumating when it’s cold again. In the wild, Ornate Box Turtles spend most of their winter cuddled up in a nice pile of soil, deep enough below the ground that frost can’t reach them.

And while Tara lives inside the museum, where it’s the same warm temperature all year-round, she will sometimes brumate, too! Even though she’s not having to hide away from the cold, she can tell that it’s time for her to brumate because of how short the winter days are. 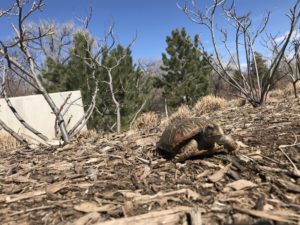 But Tara is a true Colorado native, and once it warms up, she’s ready to go outside. As part of her care, the Animal Encounters team take her out for regular walks for exercise and enrichment. You wouldn’t think a turtle of all things would need walking, but what Tara lacks in speed she makes up for in energy and determination.

Sometimes she spends her time walking around the museum indoors, especially if it’s still a little chilly out for a cold-blooded animal like her. But her favorite walks are outside walks – in the museum’s Big Backyard! She’ll spend as much time as she can exploring the yard, digging in the dirt, and doing her best to sneak away from her caretakers, often by blending in with rocks and bushes like a camouflage master.

Ornate Box Turtles are opportunistic omnivores – meaning they’ll eat just about anything they can find, including plants, bugs, and even carrion. When Tara’s out in the backyard, she likes to forage for extra snacks, trying to catch and eat any ants and beetles she sees. While we see a tiny, cute, turtle, many bugs see a hungry predator! But the funniest thing she likes to do when she’s out on a walk is to pick things up in her beak. She does it with rocks, sticks, and bark chips – she’ll search around for the perfect something, pick it up, and just hold it in her mouth while she wanders!

So next time you’re out enjoying the warm weather, keep an eye out for Colorado’s native reptiles who may also be soaking up the sunshine! You might even see one of Tara’s cousins out in the wild, eating ants and basking in the sun.