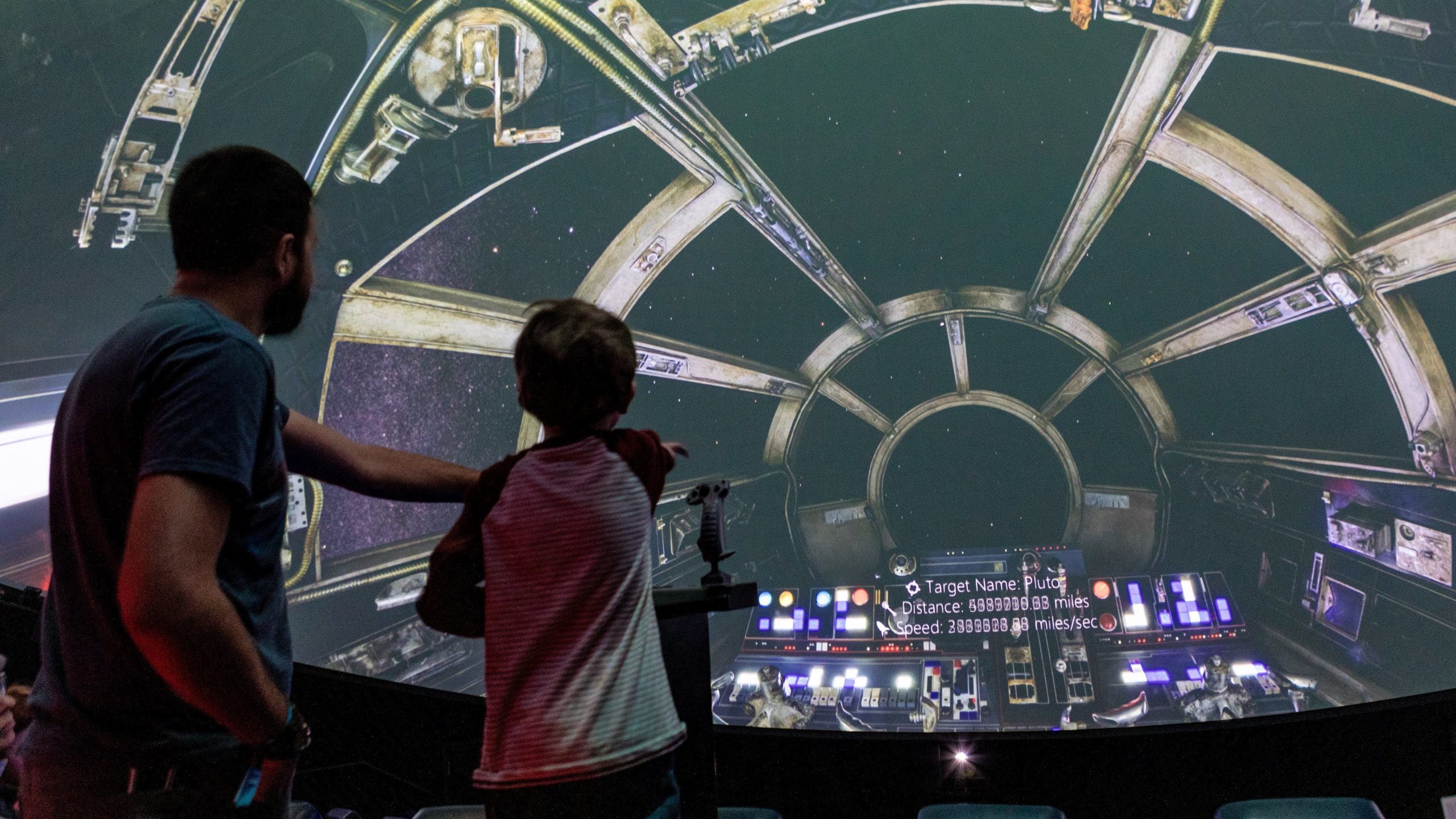 This is part of our “Museum of Tomorrow” blog series, where we explore 21st century skills – FCMoD style – and learn how they prepare our visitors for the future!

It’s a Wednesday morning in October, and 14 kindergartners are flying through space. As they near each planet, they call out its name and count its place in the solar system. Shouts of “Mercury!” started this journey, though like some of the other planets, that’s not the easiest name to pronounce.

These kiddos are not on a rocket careening through the galaxy. Instead, they’re on a field trip to FCMoD, participating in a Space Explorers Learning Lab.

“Learning Labs give kids the opportunity to learn about something in a focused way, to see a concept from start to finish,” says Angela Kettle, School Programs Coordinator. She invited me to join in on a Learning Lab to see how some of our youngest visitors are working on an important 21st century skill: problem-solving.

Take a moment to picture a child learning. What do you see in your mind’s eye? Chances are, you’re picturing a classroom, maybe a desk or chalkboard. Certainly, lots of learning happens in rooms that look like that. In reality, children and adults are constantly navigating an ecosystem of learning opportunities: interconnected experiences that interact with and influence one another. Some of these are formal: think textbooks, lectures, or classes. Some are informal, like the programs and exhibits at FCMoD.

“In reality, children and adults are constantly navigating an ecosystem of learning opportunities.”

Informal learning is special because it is strengths-based: it builds on what someone already knows and can do. It is about the process and the experience. There is no system of values to assign success or failure, so learners can embrace their curiosity and gain confidence in their capacity to learn.

Let’s meet our kindergarteners in outer space again. Their journey has a goal: by the end of the hour they will have built a rover equipped to explore one of the planets. First, Miss Angela (as they call her) introduces them to the magic of the OtterBox Digital Dome Theater.

“Having fun is step one,” she explains. So, the kids start their Learning Lab by reading a book together. It’s not your average story-time: this book has been blown up to the size of a small building, with stars and comets twinkling in the 360° expanse around them. They are learning about the planets in school, but reading the story together in the Dome gives helps them grasp the immensity of the solar system and apply their knowledge.

While problem-solving is a key skill that these learners will practice, the word “problem” isn’t mentioned once. They simply have a mission: to build a rover to explore a faraway planet. That mission comes with challenges: the problems they’ll need to solve. Mars is covered with craters and huge volcanoes. Surface temperatures on Venus are very hot – up to 900° F! Jupiter is covered with giant, swirling storms, including one that’s larger than Earth.

In this way, problem-solving is a positive endeavor rather than a negative one. To solve a problem, you must first identify what you know. This helps learners build confidence in their ability so they can build on it. It’s also an invitation to try something again but a little differently if it doesn’t go quite right the first time. Angela calls out questions to help the learners show what they know.

“While problem-solving is a key skill that these learners will practice, the world ‘problem’ isn’t mentioned once.”

“It’s called solar because of the sun, and because of all the planets going around it, it’s a system!” explains one participant proudly. The kids also know that Pluto is no longer a planet, that there are other bodies like asteroids and meteors in our solar system, and that 900° F is very, very hot.

After reading the book together, the learners are seated around tables covered with rover-ready materials: cardboard, tin foil, pipe cleaners, and more. Photos of the planets are posted on the wall to spark imagination and remind the learners of what they know. This portion of the Learning Lab is open-ended, making space for problem-solving to thrive. Angela models for the chaperones the types of encouraging questions they can ask to get kids thinking like a rover engineer.

Most of the answers lead to planning their next design move: “I want to be able to see!” shouts an enthusiastic explorer. Another answers that she’d like to go to Canada, and the flexibility of informal learning is on display. Angela asks if she knows what planet Canada is on, and she does: “Earth!” Together, they brainstorm the challenges a rover might face when exploring our home planet, and the explorer begins to engineer.

By the end of the hour, the tables are covered with rovers of all shapes and sizes. Some have wheels for covering rough terrain, others are wrapped in foil to protect from the heat. They all have something in common: they were built by children who walked into the museum as students and walked out as engineers and space explorers. That leap becomes a lot less giant when you believe, as we do at FCMoD, that problem-solving is something anyone can do.

“Problem-solving is something anyone can do.”