Getting to know turtles on World Turtle Day 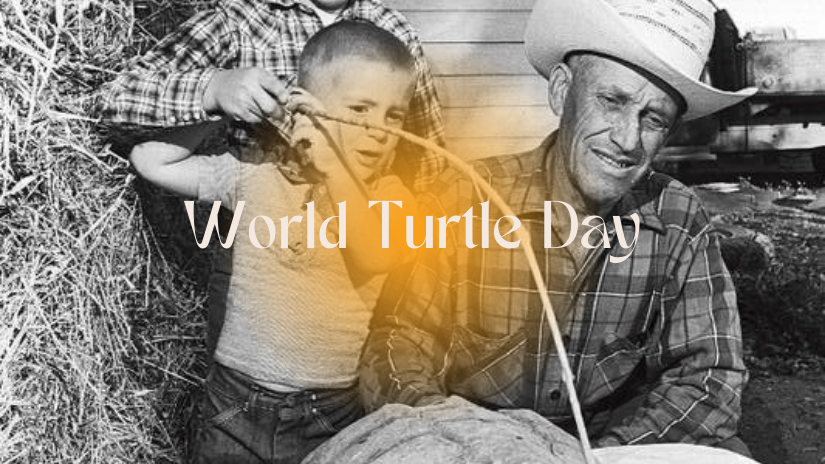 Did you know May 23 is world turtle day? If you didn’t, now you do – why not take a moment to shell-eborate one of the more unusual reptile species we share our planet with? Remember, you can view our ornate box turtle at Fort Collins Museum of Discovery anytime!

So what makes a turtle a turtle?

Turtles are reptiles, and ectotherms, or cold-blooded animals. Like snakes, lizards, and crocodiles, they can’t generate body heat the way mammals do. Instead, they rely on the environment to regulate their temperature, moving into warmer or colder areas to suit their needs.

Because of their cold-blooded nature, most turtles prefer to live in warm climates, from toasty deserts to jungle rivers to tropical seas. But there are turtles living right here in our very own snowy Colorado, too! How do they do it? By digging far enough into the earth in winter that even the frost can’t reach them. In a kind of statis, they wait out the cold months, and emerge again when the weather warms. Probably something we’ve all wished we could do, too.

It’s a common misconception that all turtles can swim.

It’s a common misconception that all turtles can swim. Take the ornate box turtle (one of those Colorado natives we were talking about), which prefers life on land and is highly adapted to digging into dirt and leaf litter. Unlike streamlined aquatic turtles, box turtles have big boxy shells!

Think of a turtle’s shell like a knight’s coat of armor. Their shells protect them from danger, allowing some species to entirely retreat inside their shells when threatened. But unlike a knight with his armor, turtle shells are actually a part of their body. The base of their shell is actually bone – ribs and vertebrae that have fused together to form the framework for this amazing adaptation. And while the framework is all bone, on the outside, they’re covered in a surprisingly familiar material. Take a look at your fingernails – that same keratin that makes up your nails and hair is what covers a turtle’s shell in hard segments called scutes. And yes, it’s pronounced “scoots”.

While many species of turtle are herbivorous, eating exclusively plants, there are still some species which live on a carnivorous diet of fish and insects. Plenty of turtles don’t discriminate, either, opting for an omnivorous diet which consists of both plants and animals.

Turtles are all over the place, including on land and in the sea. They eat plants sometimes, and bugs sometimes, and occasionally both, or neither! At least all turtles have that hard, keratin-covered shell in common, right?

Not quite. Have you ever heard of softshell turtles? This family of turtles swapped their hard scutes out for a layer of leathery skin, giving them a unique look among their order. But why trade away the protection of a hard shell? These turtles opt for speed instead of armor, and a leathery shell gives them some of the protection of a hard carapace without sacrificing speed.

As it turns out, turtles come in all shapes and sizes

Who knew there were so many different kinds of turtles out there? Next time you’re walking along the edge of a pond, or taking a hike through the woods, keep an eye peeled for something small and beshelled. It might be digging in the dirt, sunning itself on rocks, swimming in open water, or buried in the mud; it might be hunting minnows and shrimp, or just nibbling on dandelions, or maybe even looking for jellyfish – because, as it turns out, turtles come in all shapes and sizes!

Ectotherm – An animal that is not capable of generating its own body heat.

Vertebrae – The bones that make up your spine.

Keratin – A tough material that makes up the hair, nails, and horns of animals.

Scute – A hardened plate of keratin or bone.

Herbivore – An animal whose diet consists of plants.

Carnivore – An animal whose diet consists of other animals.

Omnivore – An animal whose diet consists of a mixture of plants and other animals.

Carapace -The top half of an animal’s shell. Can refer to the shells of arthropods like crabs and scorpions, or those of turtles. The underside of a turtle’s shell is called a plastron.