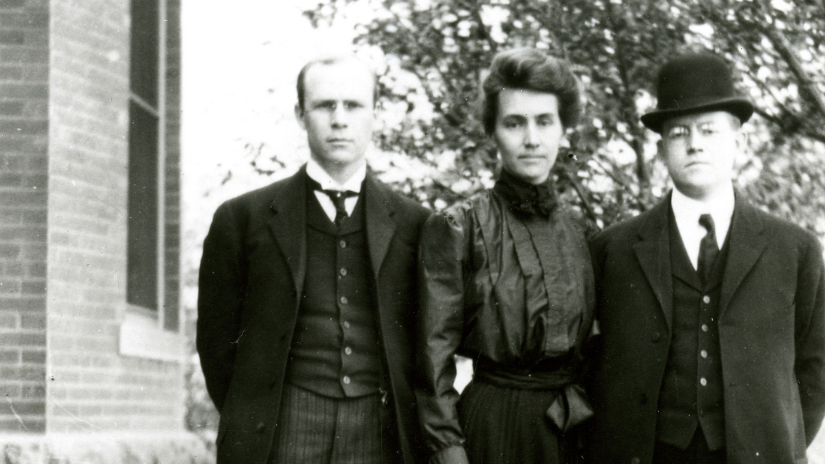 When did the 1918 flu pandemic, also known as the “Spanish Flu”, first show up in Fort Collins? It was very likely here in early October 1918 as the city physician, Dr. Gooding, recalled treating a case of influenza on October 3rd (The Fort Collins Express, November 28).  However, according to the rumor mill, the flu could have been in town even earlier, in late September at the agricultural college where there were students training for military service.

As Major Mills, the camp surgeon, was denying rumors of dying soldier students, the mayor of Fort Collins, Fred Stover, was asking citizens “…not to become excited over the threatened epidemic and not to think that every cold is the disease.” (Fort Collins Express, October 9). Calm was urged and the mayor signed a proclamation ordering the quarantining of all sick persons and a ban on all public gatherings “…with the view of stamping out a possible epidemic in Fort Collins.” (Fort Collins Express, October 10). The newspaper reminded people to better follow the quarantine rules but by that point, October 20th, it was clear that Fort Collins had not avoided the flu epidemic after all.

The latter half of October was when the epidemic really took hold in Fort Collins. The Express reported on the 20th that city officials looked upon the coming week “with fear.” Part of why city officials were so worried was that there was no accurate account of those who were sick with influenza. Doctors were overwhelmed with patients and unable to make time to file daily reports. Officials were forced to make a “fairly good estimate” for the number of influenza cases and arrived “…in the neighborhood of 150 and those with pneumonia not over 20.” (The Fort Collins Express, October 23).

City officials turned to Orrin Watrous, president of the Commercial Club, and the same group of volunteers who had helped with the drive for the Fourth Liberty Loan for the support of the war to canvas the city for cases of influenza. Around October 24th, the volunteers reported back with 344 cases of flu in Fort Collins, more than double that good estimate from before (Fort Collins Express).

On November 2, Mayor Stover submitted a report (to persons unknown) tallying daily case numbers from October 23 through the 1st of November. That ten-day period alone has a total of 355 cases of influenza and fourteen of pneumonia. The “country” (very likely to mean county, or at least, those living outside of city limits) saw case rates at roughly a third of what Fort Collins saw. As Mayor Stover wrote, the numbers showed that there was “no apparent falling off in the epidemic.”

The epidemic did start to fall off however, even through November which saw not only the Armistice celebrations for the end of the First World War but also statewide elections for Colorado State government. The Fort Collins Express reported a total of cases from October 23rd to November 28th at 805 (which would have included Mayor Stover’s number of 355). Certainly cases did not keep up the rate of infection that late October saw. As rates slowly fell throughout the month of November and into December, city officials found they had time convene committees, issue recommendations, and organize their response to the influenza epidemic, including appointing Orrin Watrous as Quarantine Officer, put in charge of tracking case numbers. These more organized responses were late, but ultimately due to officials being overwhelmed rather than a lack of effort or concern. The experience of the fall and winter of 1918, both the heavy caseloads and the more planned response, served the city when a second wave of influenza cases arrived in early spring.