Hiss and Tell: All About Madagascar Hissing Cockroaches 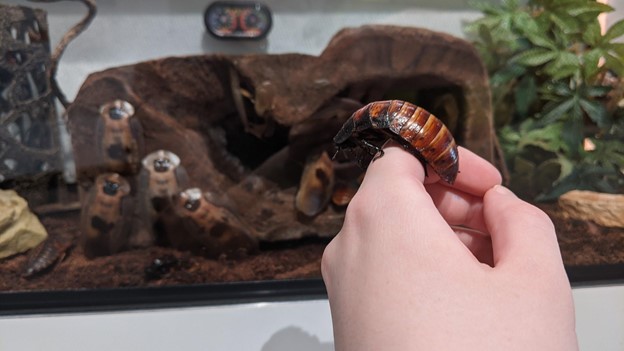 Ever wanted to know more about the animals we have here at the museum? Grab a snack, and take a deep dive into the world of Madagascar hissing cockroaches from the comfort of your own home!

Madagascar hissing cockroaches are, you guessed it, native to Madagascar! Like all cockroaches, Madagascar hissing cockroaches (or “hissers” as they are sometimes called) are scavengers, which means they eat just about anything they come across. In the wilds of Madagascar, they mostly eat dead plant matter, from fallen leaves to rotten wood and decaying fruit. Here at the museum, they’re fed a scrumptious mixture of fruits and vegetables, and for a protein-boosting treat, their favorite: dog kibble!

Unlike many species of cockroach, Madagascar hissing cockroaches are wingless. Instead of being able to fly away from predators, they have to rely on running and hiding. But what happens when this isn’t enough to keep them away from danger? That’s where the hissing comes in!

When threatened, these cockroaches make a loud hissing noise, like that of an angry cat or snake, that makes them sound much bigger and scarier than they actually are. Their strategy hinges on their would-be-predator becoming scared or surprised by this sudden noise—while cats and snakes hiss as a warning of an incoming attack, hissing cockroaches are otherwise defenseless, and have to make a run for it as soon as they get an opening.

But hissing cockroaches don’t just hiss to defend themselves. Amazingly, they actually have a number of distinct hisses they use to communicate different things to each other. Both male, female, and juvenile cockroaches will hiss defensively and in alarm, but there are two other hisses that only males use: the male-to-female courtship hiss, and the male-to-male dominance hiss.

While these cockroach’s bark may be worse than their bite, they can still pack a punch, at least when it comes to fighting other cockroaches. Speaking of dominance battles, male hissing cockroaches will often fight amongst themselves to establish a social hierarchy, and figure out who gets the best spot on the log or the best food.

But dominance displays between male cockroaches go beyond simple hissing. Male hissers can be differentiated by females from their “horns”, distinctive twin bumps on their pronotum (that’s the shield-like segment on the back of their head). They use these horns much like rams do—by headbutting other males in a display of strength. The male hissing cockroach will attempt to “bulldoze” under his opponent, knocking him off of his perch. However, the funniest part of a Madagascar hissing cockroach dominance battle is definitely the pre-fight posturing. In an attempt to intimidate the other male and end the contest before it begins, the cockroaches will wiggle their butts aggressively at each other. So scary!

Madagascar hissing cockroaches are unique in the insect world in a lot of ways, and it’s hard to decide which of their crazy adaptations is the strangest. But there’s one question we still haven’t explored: how do they make those loud hissing sounds? While most insects that make noise do so by rubbing parts of their body together, Madagascar hissing cockroaches actually use their spiracles (the cockroach equivalent of lungs). By pushing air out of the spiracles lining the side of their abdomen, they create audible vibrations in the air, making noise in basically the same way that we humans do when we talk!

Next time you’re in the museum, be sure to check out the Madagascar hissing cockroaches and say hello. While they may look quite different from you and I, we have more in common with them than you might expect!