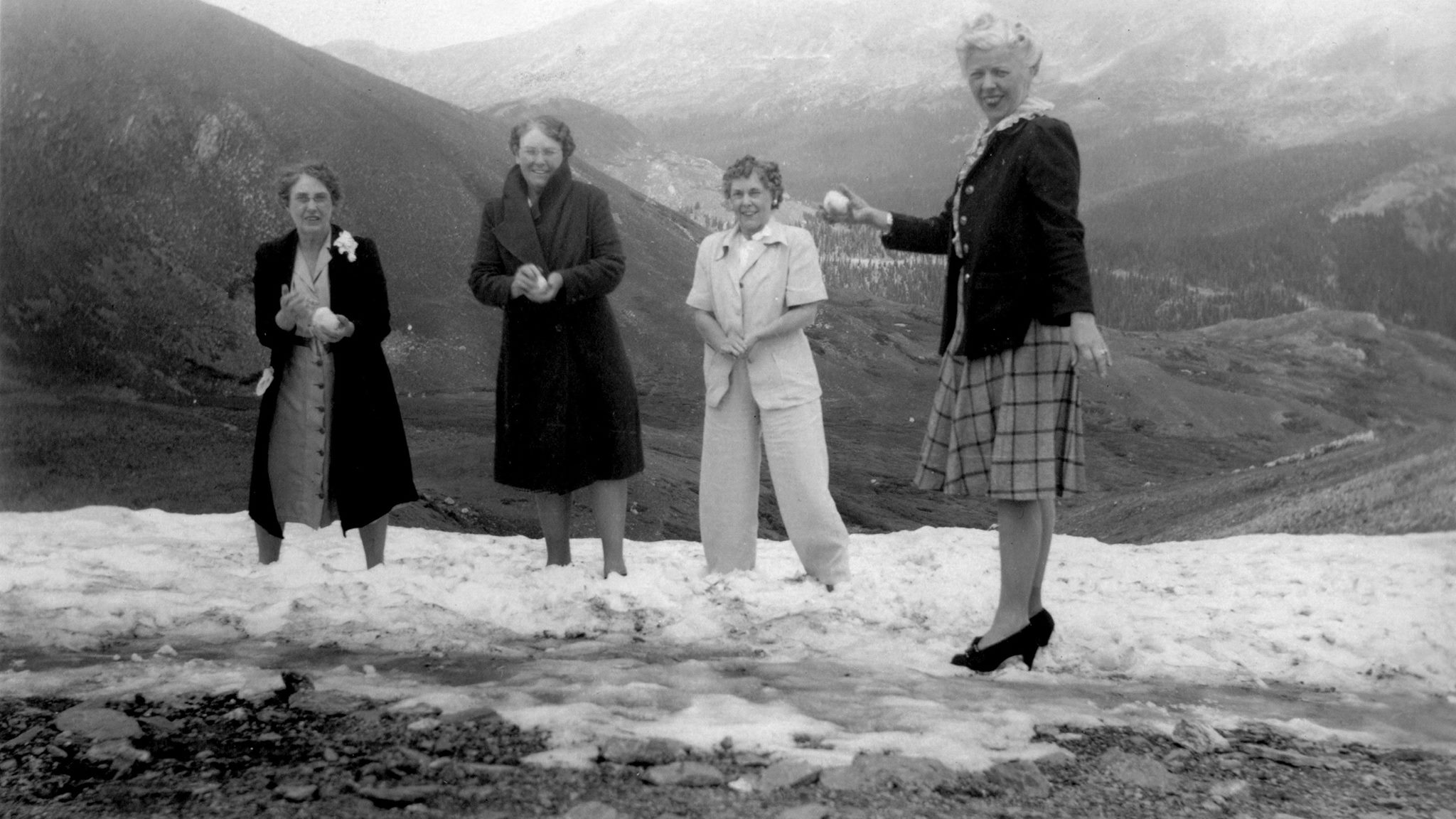 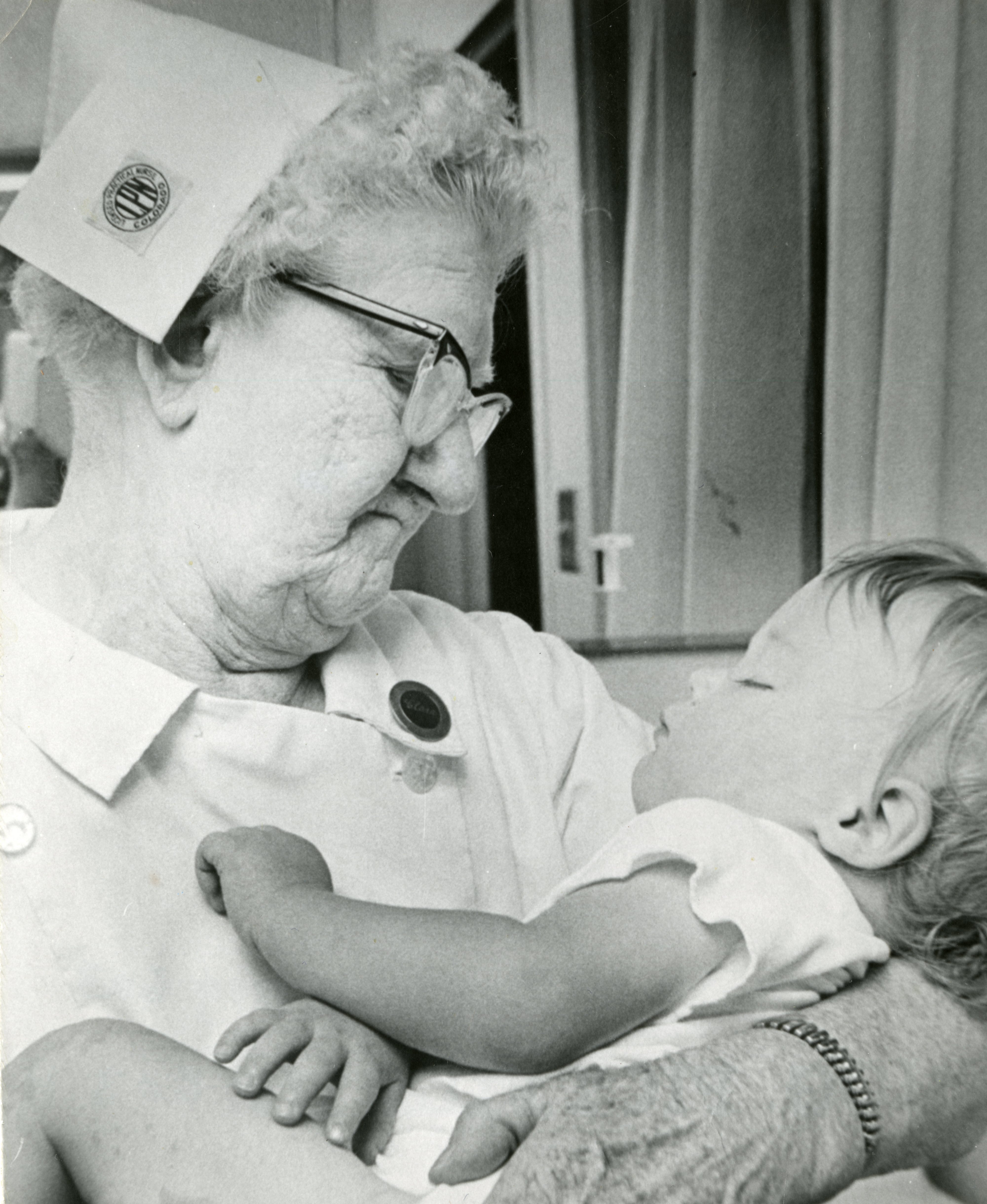 Clara Ray served as a pediatric nurse from 1929 to 1972 at the Poudre Valley Memorial Hospital. In those early years at what was called the old Poor Farm, Clara stoked fires in the coal-burning stoves and cleaned rooms as well as caring for patients. In those days, the nursing “staff” worked essentially on duty 24/7.

If there was an emergency night surgery, one of them assisted; when a patient was critically ill, they took turns napping and tending the patient. Clara could always be found rocking a young child to sleep. Clara served many at the Hospital. 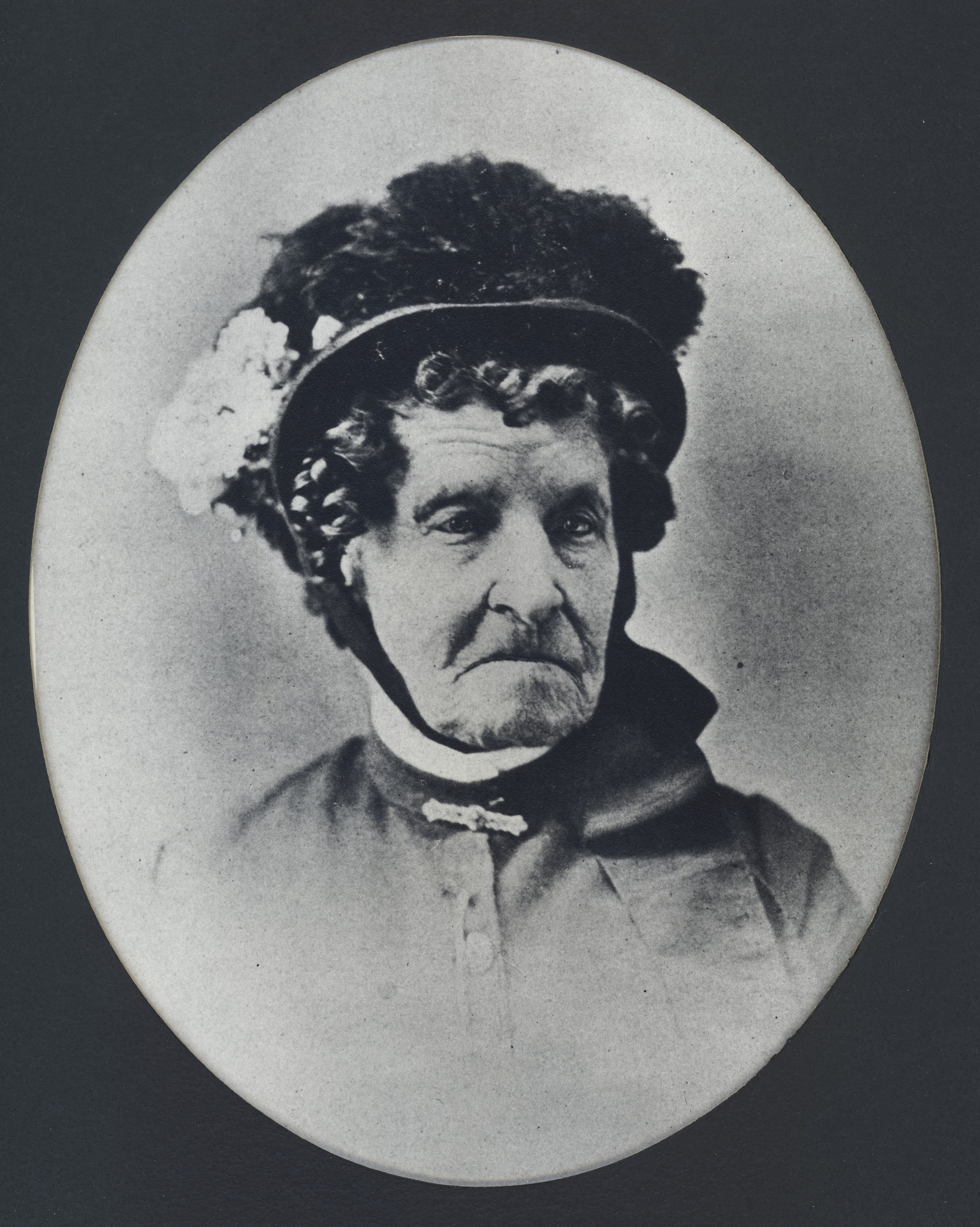 Elizabeth Stone, born in Hartford, Connecticut, would travel a long way in her life to make her home in Fort Collins, Colorado. Elizabeth Stone became a local legend as our own cities very own Founding Mother. Auntie Stone was famous for her energy, and she acquired her nickname of “Auntie” from serving on the frontier with soldiers in the mess hall.

Stone had many accomplishments in her life – she was beloved in her own time, and still is today. She started Lindell Mills, the town’s first flour mill. She was in the hotel business. And today, Auntie Stone’s very own historic cabin is currently located at the Heritage Courtyard on Mathews Street. She continues to inspire history interpreters, educational programs, and many more! 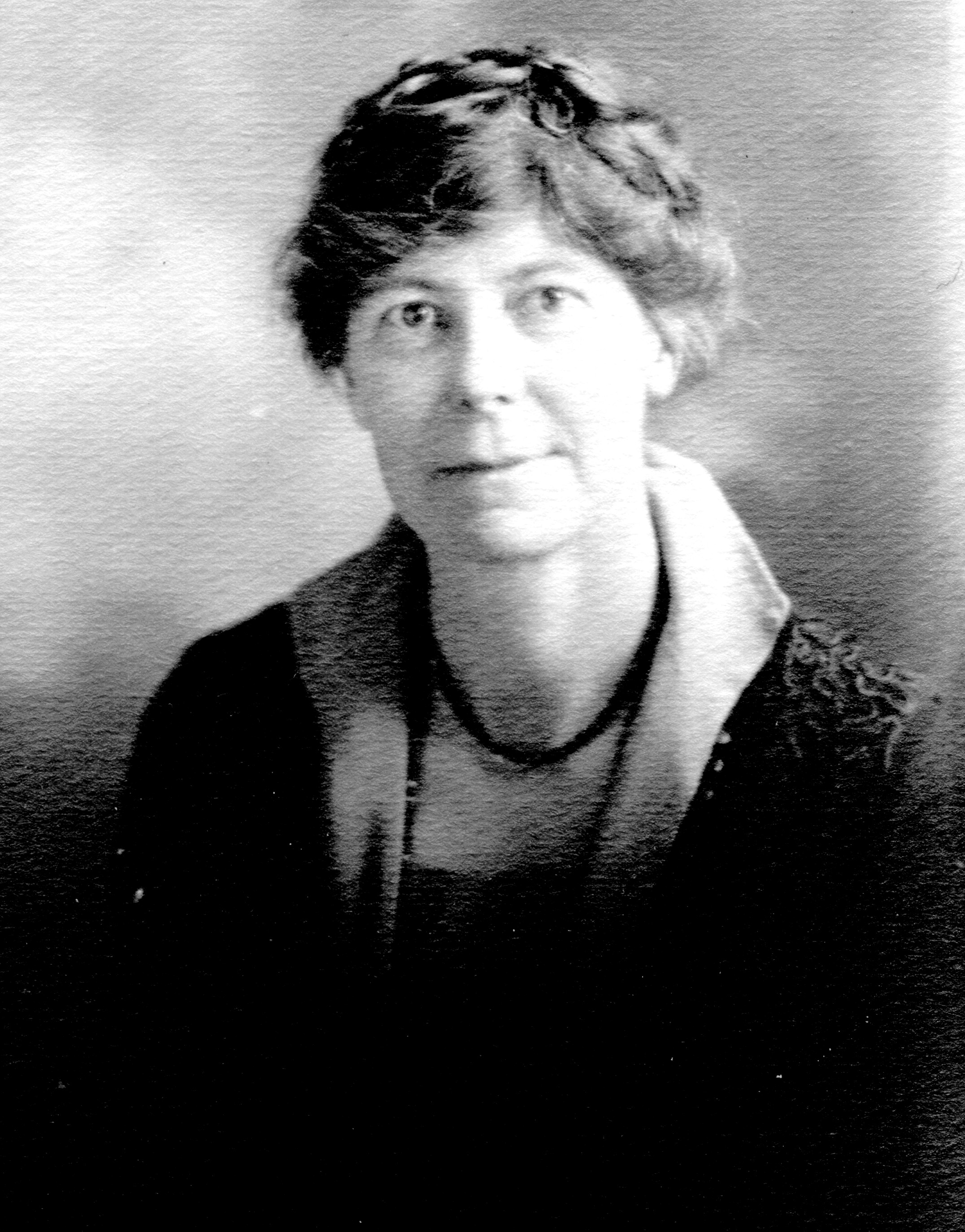 Inga was known for her contributions to academia. She joined the Home Economics department at Fort Collins’ Colorado Agricultural College in 1908, at a time when several faculty members were starting to study the unique effects of high altitude on both crop growth and food preparation. Inga conducted active research in food preparation and preservation without laboratory facilities. Allison entered academia via research and natural sciences and became the head of the Home Economics Department, expanding the course of women’s education.

Next time you successfully bake a pan of brownies in Fort Collins that doesn’t develop a sinkhole in the middle, it will probably be because you considered some of the science developed by Dr. Allison. 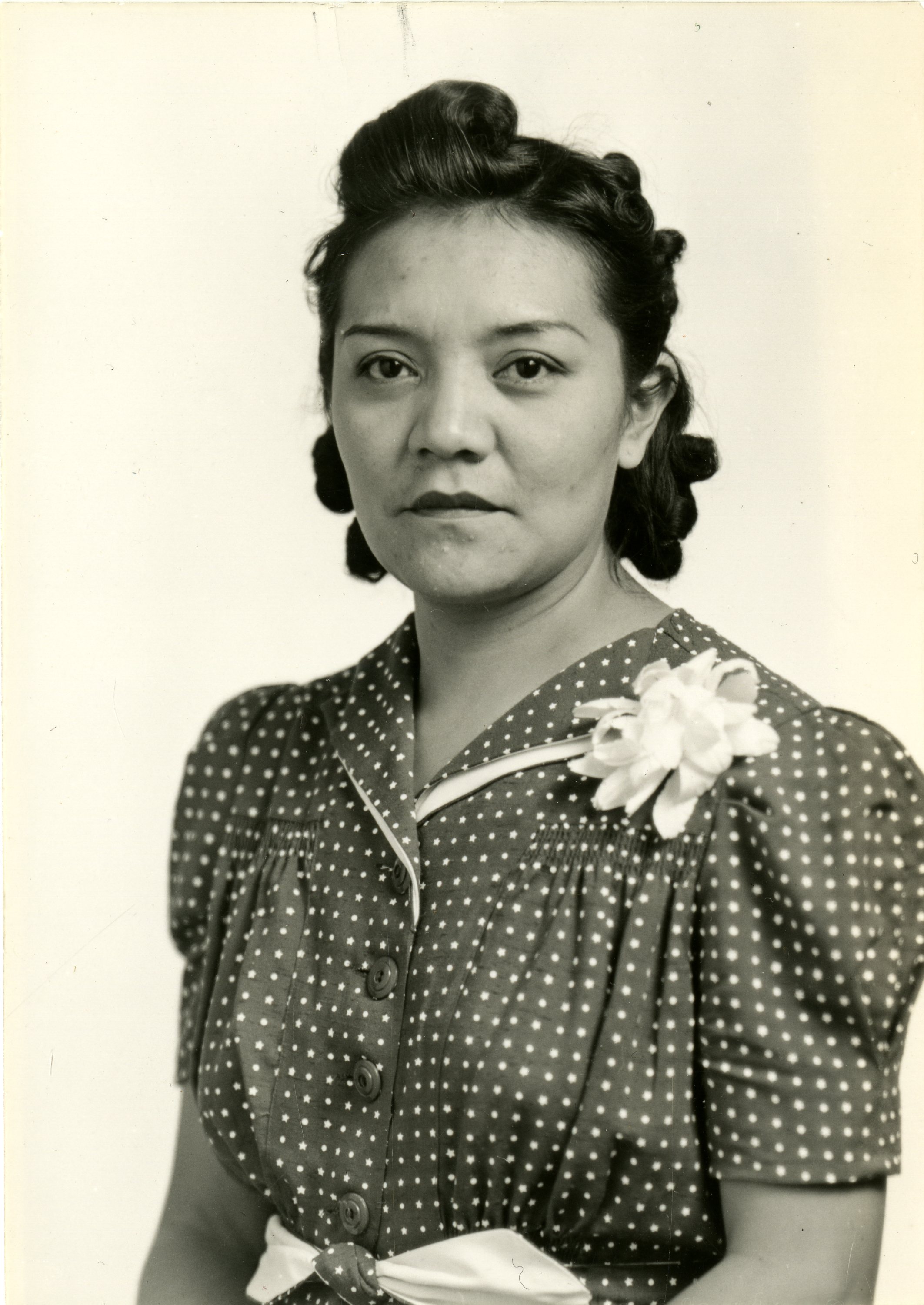 Jovita was born in Fort Collins in 1908. Jovita’s parents worked in the sugar beet fields, and they understood that the way to a better life was through education, and thus encouraged Jovita and her younger brother Salvador to go to college. This was not the reality for most parents in Jovita’s community at the time – many children were needed to help support the family and work in the fields rather than go to school.

Jovita graduated from Fort Collins High School in 1932. She was the first Mexican-American student to graduate from public school in Fort Collins. Following high school, she enrolled at CSU (known at the time as Colorado Agricultural College) and became the first Mexican-American to graduate from CSU in 1936 – with degrees in economics and sociology, and a minor in education.

There are no identifiable photos of Jovita in either the Fort Collins High “Lambkin” yearbooks, or the CSU “Silver Spruce” yearbooks. The only time her name is mentioned is one instance in the 1937 Silver Spruce under the heading “Additional Seniors.” While there’s no evidence that these omissions of Jovita were intentionally malicious, they do follow a pattern of marginalized people often being invisible or overlooked in the historical record. Additionally, these omissions make people like Jovita difficult to research – most of the information gathered is from more recent newspaper clippings and the small number of materials that her family donated to the Archive. 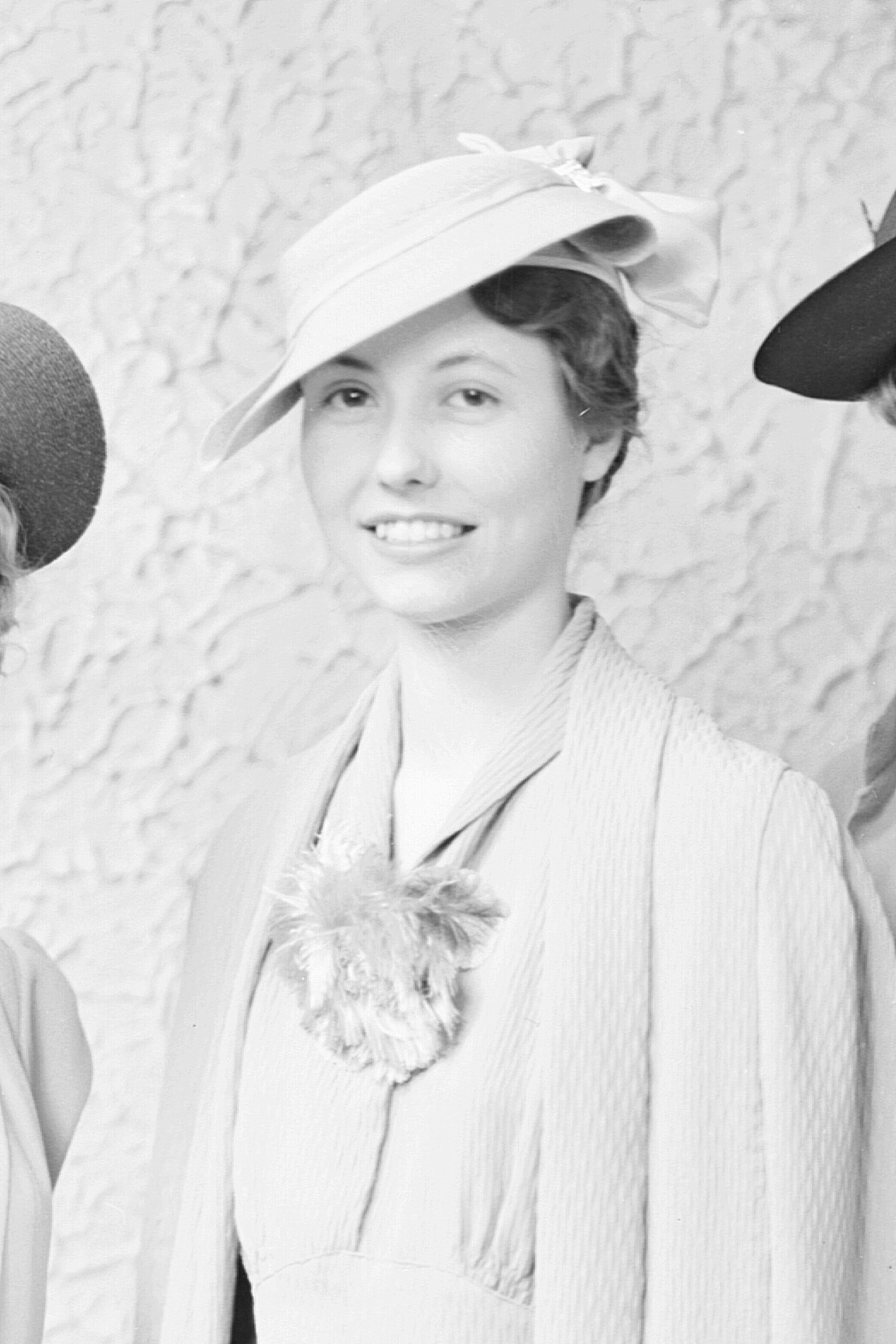 Charlene was a lover of history. Charlene was assistant editor of the student newspaper at Fort Collins High School and she attended Colorado A&M, present-day CSU, where she was feature editor of the Collegian. Charlene also collected thousands of photographs and other archival materials, storing items under her bed until the local history section of the library was completed.

So many people have worked to make the Archive what it is over the years, but Charlene truly was the one who started it all. Charlene secured grant funding to start a program interviewing long-time residents of Fort Collins. Aided by members of the Fort Collins Historical Society and her personal connections, Charlene assembled and organized an amazing resource of thousands of photos and she wrote many historical articles for local news as well as her book Streets of Fort Collins. Charlene’s work can still be seen all over the Archive today. The Archive at Fort Collins Museum of Discovery considers her a patron saint, as she spent years of her life collecting histories that continue to tell the story of Fort Collins. 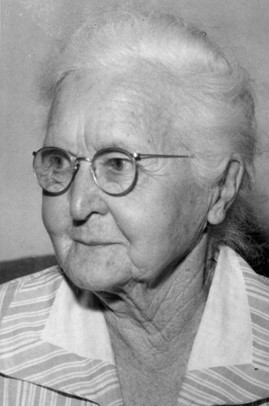 Leonore came to Fort Collins in 1893 and taught 6th and 7th grade at the Old Franklin School. But Nora had attended Michigan Medical School for two years, and, after a brief hiatus,  finished out her medical degree at the University of Colorado Medical School. She started her Fort Collins medical practice in 1908. At that time, automobiles had not come into common use, so Dr. Miller often traveled long distances by horse-drawn buggy to reach her patients. Much of her practice consisted of maternity cases, at a time when most babies were born at home rather than in a hospital.

The shortage of school teachers during WWII called her back to her earlier profession, and 1942 found her teaching physics, math and engineering at a high school in Montana.  She retired from teaching in 1949; died in 1959; and is buried in Grandview Cemetery. Although Nora transitioned her practice to other areas and began to teach after WWII, she is noted as an ambitious and inspiring woman to those pursing and involved in the medical field. 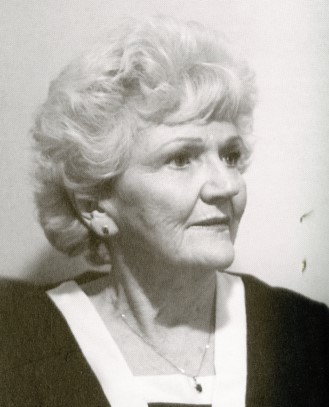 Phyllis came to Fort Collins in 1949. After a stint hosting a talk show on KCOL, Phyllis became an internationally recognized handwriting analyst. How does a woman in the 1970s become a graphoanalyst? Mattingly got professional training at the University of Chicago. Using her professional skills, she verified and interpreted wills, diaries and other documents, including – one of Adolf Hitler’s. She used her expertise in such varied areas as custody cases, pre-marriage compatibility consultations, and hiring decisions.

She taught handwriting analysis in Australia, lectured to the United Kingdom Chapter of Graphoanalysis, was included in the 1988 and 1989 editions of Who’s Who of the World’s Professional Women, and in 1987 was the International Graphoanalyst of the Year. The prosecution in the O.J. Simpson trial hired her to analyze handwriting of witnesses. She told them not to use Mark Fuhrman, but they did anyway, and he turned out to be an unreliable witness. Mattingly’s other claim to fame was as Fort Collins’ Welcome Lady. She brought newcomers gifts, coupons, and information about the town. She supported many diverse FoCo institutions like the symphony, the library, the Christian Science Church, the Women’s Choral Group, the local AARP chapter, and Easter Seals.

These women, and many more, have made history for being who they were. They are remembered for their accomplishments, as well as for the historical impact they have made on Fort Collins. Happy #WomensHistoryMonth!