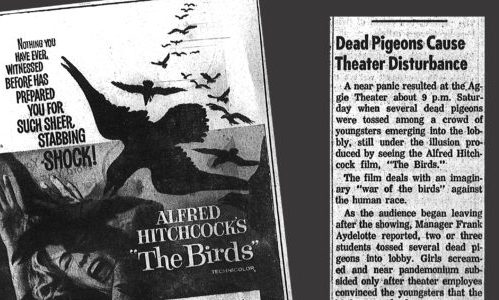 Today, a 1965 CSU alumnus stopped by the Archive to dig up an article from his college days. On April 21st, 1963, five members of the Sigma Phi Epsilon fraternity decided to go to a showing of the new Hitchcock film, “The Birds,” with a little something up their sleeves.

Smuggled in the jackets of these young Greeks were several dead pigeons. These young men waited until the part of the film when the birds start attacking, then began tossing the dead pigeons onto the unsuspecting audience. The Coloradoan reported it to be “near pandemonium.”

It seems these boys pulled off quite the coo…er, um, coup.